Military Moms Will Get 12 Weeks Off For Maternity Leave 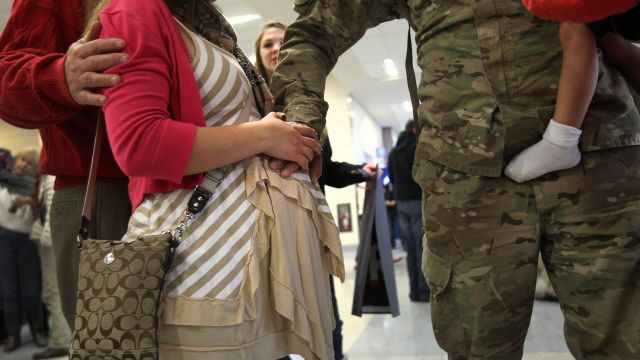 SMS
Military Moms Will Get 12 Weeks Off For Maternity Leave
By Katie Link
By Katie Link
January 28, 2016
The Department of Defense is changing up its maternity leave policy in hopes of attracting, and retaining, the right people for the forces.
SHOW TRANSCRIPT

Defense Secretary Ash Carter has made a lot of changes in his quest to attract and retain the “force of the future.” In addition to replacing the military’s pension plan and opening all combat positions to women, he's also overhauling the force’s maternity leave policies.

“Among the stresses military families face, having and raising children is near the top,” Carter said. (Video via U.S. Department of Defense)

So Carter announced a set of initiatives to alleviate some of that stress. Women across all branches of the armed forces will get 12 weeks of maternity leave, and men will get up to 14 days of paid paternity leave. Breast-feeding rooms will open across the country, and child care will be expanded.

For military members who don’t have kids but are trying, the Department of Defense will pay for troops to freeze sperm and eggs.

Sounds awesome, right? Members of the Army and Air Force think so at least. Prior to this announcement, new moms got only six weeks off.

And yet Carter said the military needed a uniform standard to retain forces while still being ready to work, so 12 weeks it will be.

"Always, always, the mission effectiveness of our force comes first. We are not Google. We are not Wal-Mart. We're fighters," Carter said.