We Know What The Middle Finger Means, But Where Did It Come From? 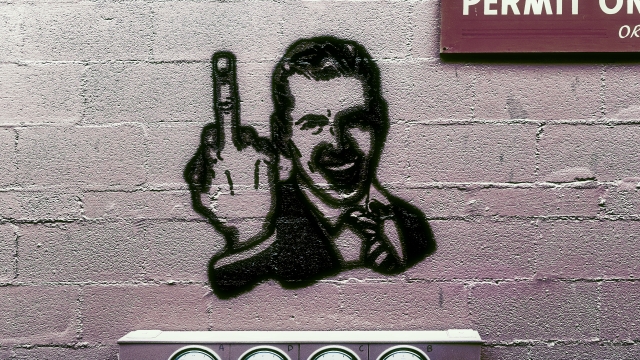 SMS
We Know What The Middle Finger Means, But Where Did It Come From?
By David Cawthon
By David Cawthon
October 14, 2016
The one-finger salute might be humanity's longest-running insult gesture.
SHOW TRANSCRIPT

You can say a lot with a middle finger. Pissed off rock stars love it. Pro athletes and politicians do, too. It's an emoji. It's even got its own song. This thing is everywhere.

But how did the middle finger become such a staple insult in America?

The first known recorded sighting in the states is in an 1886 baseball photo. It shows Charles "Old Hoss" Radbourn of the Boston Beaneaters flipping the bird. He likely borrowed the gesture from Italian immigrants, who might've imported it to the U.S.

Mystery solved, right? Not quite. Yes, civilizations throughout time developed their own variations of the one-fingered salute. In some places, it's a thumbs up; in others, it's a two-fingered taunt, which was said to be a favorite of British medieval archers. But while that helps us dig back further, we're looking for one digit, not two.

For that, we have to go to the early AD years when Roman emperor Caligula asked people to bow and kiss his middle digit. That was said to be a reference to ... his ... you know. But using your middle finger as an insult probably didn't originate in Rome.

Maybe it was born in Greece. Most people say the first documented reference was from a comedy from around 423 BC called "The Clouds." It features Socrates scolding a smart-ass pupil who gives the phallic gesture to his teacher. In this play, it boils down to bathroom humor.

But maybe we've been looking at the wrong continent — and the wrong species. This all might've originated from squirrel monkeys in South America, which assert their dominance by using the phallic gesture not with their fingers, but in a more literal way. So man might've ripped off Mother Nature.

How has this ancient insult endured for centuries, across continents and cultures and creatures? Smart people like author Annie Murphy Paul have an idea: Gestures help us communicate things words just can't; it's a sort of "second language" that really sends the message home.

But anyone with a brain and a middle finger can see why it got so popular. Just use it sparingly.