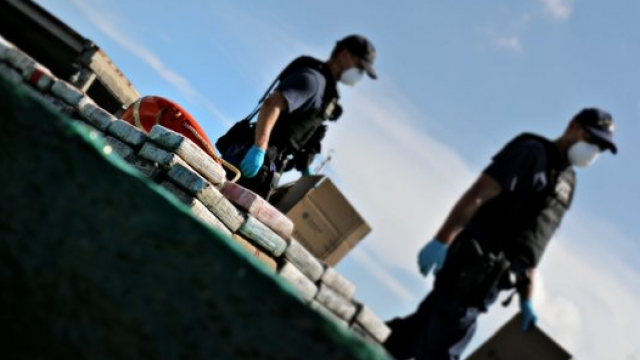 SMS
Miami-Area Border Agents Bust Ship Carrying 2,000 Pounds Of Cocaine
By Matt Moreno
By Matt Moreno
June 2, 2016
U.S. Customs and Border Protection seized about 800 bricks of the drug from a cargo ship on the Miami River in Florida.
SHOW TRANSCRIPT

It's one of the largest drug busts in the Miami area in over a decade.

On Wednesday, U.S. Customs and Border Protection seized some 2,000 pounds of cocaine from a cargo ship on the Miami River in Florida.

"These metal compartments were flushed. They were welded back over. They sand them down and repaint them, and then it makes it really hard to see," Port Director Tony Defrancisci said.

Agents say they first noticed a white powdery substance while drilling onboard the mostly empty ship.

They later discovered hidden compartments, revealing 800 bricks of cocaine. The ship was reportedly traveling from Haiti and was intercepted near Miami where the customs agents found the drugs.

As the Miami Herald points out, the bust brings back memories of the "Miami Vice" TV show days.

And according to authorities, it's the biggest drug bust they've seen since the latest movie came out in 2006.

The assistant port director told the Miami Herald, "Last year was about 1,000 pounds, but we'd have to go back 12 to 15 years for the last time we had something this big on the river."

An official said the crew of up to nine people have been detained and are expected to be deported.