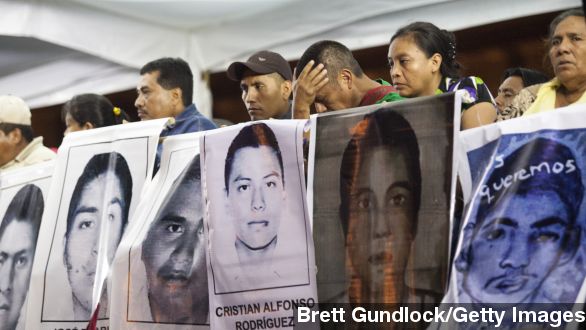 The terrible saga in Mexico continues, with the country's attorney general saying three gang members have admitted to killing the 43 missing students kidnapped in September.

"The students were stopped by police, fired on, handed over to a criminal gang who took them to a landfill where they were executed their bodies burned and finally the remains disposed of in a river."

Attorney General Jesus Murillo Karam believes the remains found in the San Juan River are those of the 43 missing students, though he cautioned the DNA testing needed to ID the students could take months because of the brutal burning. (Video via Office of the President of Mexico)

The possible resolution to this case comes after a long and drawn out investigation.

Since the students went missing in September, Mexican authorities have arrested more than 70 people, including mayor of Iguala who investigators believe was responsible for the students being handed over to the criminal gang. (Video via Fusion)

The kidnapping of the missing students has led to nationwide protests in a country where many citizens already don't trust the government.

"We want results but with proof, the moment we as parents are sure what the attorney general is saying is true only then will we accept it."

The New York Times writes the attorney general's announcement didn't sit well with relatives of the missing especially, "In a country with a history of coerced confessions and staged arrests."

President Peña Nieto responded to the attorney general's announcement on Twitter writing, "The capture of those who ordered it isn't enough; we will arrest everyone who participated in these abominable crimes."

According to CNN, Mexican authorities have turned to a forensic team in Argentina to help identify the DNA of the remains recently discovered, though there is no timetable for when they might be able to identify the remains.