Meet NASA Pioneer Katherine Johnson Before Her Movie Comes Out 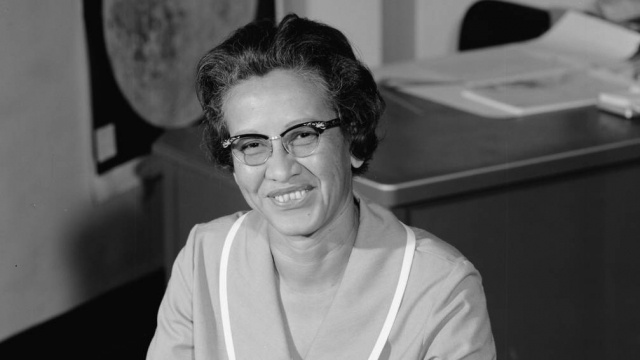 A familiar face has signed on to the film "Hidden Figures," which tells the story of the black women who helped NASA win the space race.

Pharrell Williams will produce and score music for the film. We know who Williams is, but can you name this woman? She's a NASA mathematician who helped take the American space program to new heights.

During her time at NASA, Katherine Johnson helped send the first Americans into space and to the moon, calculating most of the coordinates by hand.

"We told them how fast they would be going, and the moon would be there by the time you got there," Johnson told Makers.

Johnson's calculations were so accurate, legendary astronaut John Glenn requested that she double check NASA's new computers before he took off.

Johnson began making her mark on space travel in the 1950s, when both women and blacks were marginalized in American society — and at NASA. Johnson started working at NASA when it was still segregated. But her sharp skills earned her the nickname "the human computer" and helped her break through the barriers she and her colleagues faced.

"I just happened to be working with guys, and when they had briefings, I asked permission to go. They said, 'The girls don't usually go.' I said, 'Is there a law?' And they said, 'No.' So then my boss said, 'Let her go,'" Johnson remembered.

The woman who graduated from college at 18 is now a 97-year-old living legend, revered among her NASA successors.

"I feel like her story gives me permission to be a badass," Heather Graham said.

Johnson will be played by Taraji P. Henson in "Hidden Figures." Her colleagues Dorothy Vaughan and Mary Jackson will also be portrayed in the film, which blasts into theaters in January 2017.