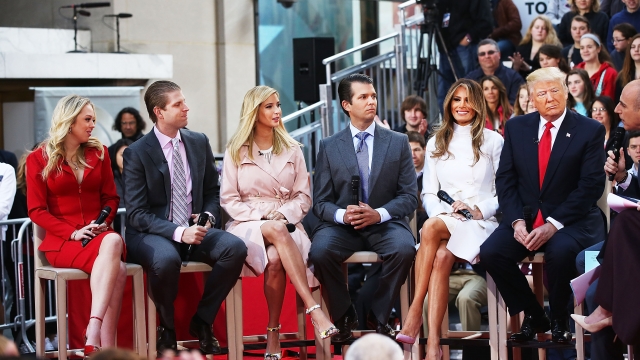 There's a new first family headed to Washington. And when you add all the kids, spouses and grandchildren into the mix, the Trump family is a pretty big one.

Let's start with who will be living in the White House alongside President Donald Trump: his wife, Melania, and their son, Barron.

Melania Trump, who's originally from Slovenia, will be the second first lady born abroad. John Quincy Adams' wife, Louisa, was born in Britain.

A former supermodel, Melania Trump is fluent in five languages. As first lady, she plans to focus on fighting cyberbullying.

Barron, 10, will be the first presidential son to live in the White House since John F. Kennedy Jr. more than 50 years ago.

Donald Trump has been married twice before. He had three children with his first wife, Ivana.

Those children all work as executive vice presidents for The Trump Organization and will lead the company during their father's time in office.

The oldest, Donald Trump Jr., is married to model Vanessa Haydon, and they have five children.

A mother of three, Ivanka Trump also has her own fashion brand. She's married to real estate developer Jared Kushner.

And Eric Trump oversees Trump Winery and his own foundation, which benefits St. Jude Children's Research Hospital. His wife, Lara, is a CBS producer.

Donald Trump had his daughter Tiffany while married to Marla Maples. Although the recent college graduate's dreams of being a pop singer didn't pan out, Tiffany told ABC she's thinking about becoming a lawyer.