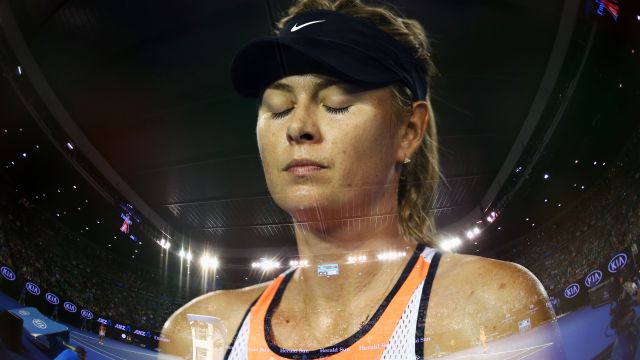 SMS
Maria Sharapova Says Her 2-Year Ban From Tennis Is 'Unfairly Harsh'
By Calvin Stovall
By Calvin Stovall
June 8, 2016
After Sharapova failed a doping test, the International Tennis Federation gave her a two-year ban. She says it's all an honest mistake.
SHOW TRANSCRIPT

Tennis star Maria Sharapova will serve a two-year suspension after testing positive for the banned substance meldonium in January.

The five-time grand slam winner was given a provisional ban by the International Tennis Federation in March to allow for a full investigation into her failed test.

Wednesday, the ITF concluded its probe, announcing Sharapova can't compete again professionally until January 2018. In a statement on her Facebook page, Sharapova said she plans to fight the suspension.

Her statement reads, "While the tribunal concluded correctly that I did not intentionally violate the anti-doping rules, I cannot accept an unfairly harsh two-year suspension."

At a press conference in March, the 29-year-old was adamant that she wasn't using the drug to enhance her performance on the court.

She said: "For the past 10 years, I have been given a medicine called Mildronate by my family doctor. ... After I received the ITF letter, I found out that it also has another name of 'meldonium,' which I did not know."

Sharapova accepted responsibility for not checking a Jan. 1 email from the World Anti-Doping Agency announcing the addition of meldonium to the list of banned substances. But she still says she doesn't think her punishment fits the crime.

"It's very important for you to understand that for 10 years this medicine was not on WADA's banned list and I had been legally taking the medicine," she said.

The ban has already jeopardized Sharapova’s endorsement deals with Nike, Porsche and American Express, which helped make her the highest-earning female athlete of the past decade. Sharapova topped Forbes' list of highest-paid female athletes 11 years straight before Serena Williams passed her this June.

This video includes clips from Maria Sharapova IMG and images from Getty Images.