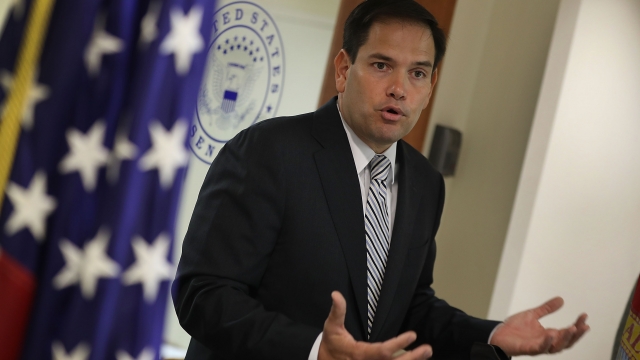 SMS
Marco Rubio Most Definitely Can't Make Up His Mind About Re-election
By Eugene Daniels
By Eugene Daniels
June 15, 2016
The senator seems to be rethinking going back to the private sector, but he doesn't have long to make up his mind.
SHOW TRANSCRIPT

Senator and failed presidential candidate Marco Rubio said he's leaving the Senate for good, so stop asking him about it. But oh, how times have changed.

"I'll go home later this week and I'll have some time with my family, and then if there's been a change in our status, I'll be sure to let everyone know," he said Wednesday.

Well, that didn't take long. And apparently, this guy is the proverbial straw in this scenario. Florida Lt. Gov. Carlos Lopez-Cantera is currently running for his buddy Rubio's soon-to-be open Senate seat and says he has the best chance of winning it. But on Sunday, he apparently told Rubio he'd be willing to step aside if Rubio should run for re-election.

Lopez-Cantera told Politico he said something like this to Rubio: "This is bigger than me. And this isn't about me. And it's not about you. It's about our country and this election. It's deeply consequential."

Rubio's new attitude on running makes sense: He's young, he's a player on the national stage and it's highly unlikely his presidential aspirations have dissipated after this year's primary.

And members of the GOP have been seriously pressuring the senator to throw his hat back in the ring — which leads us to believe there's some serious concern about the down-ballot races in November.

The GOP is in a position to possibly lose its majority in the Senate, and that concern is made even worse by the unpopularity of the candidate most likely to be at the very top of the ticket in the general election.

But a Rubio win is not actually a sure thing. A Quinnipiac University poll from last month found 49 percent of Florida voters disapprove of his performance, while just 42 percent approve. That's the first time he's been in the negatives since he was elected.

Either way, Rubio has to move fast. He only has until June 24 to make the filing deadline.