Long Road Ahead For Climate Deal After Negotiators Release Draft 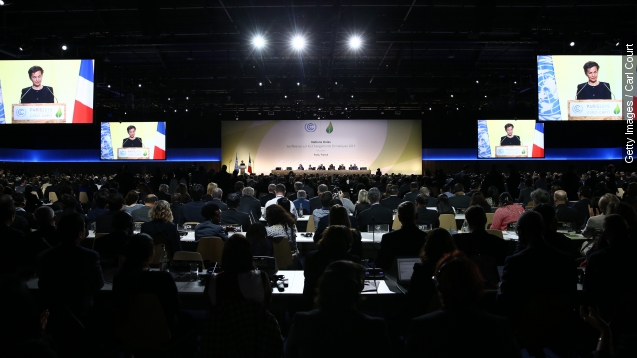 SMS
Long Road Ahead For Climate Deal After Negotiators Release Draft
By Ethan Weston
By Ethan Weston
December 5, 2015
Negotiators in Paris agreed on a draft for a climate change deal Saturday, but not everyone agrees on the best way to move forward on the issue.
SHOW TRANSCRIPT

Negotiators have put forward a draft of their plan to stem climate change. (Video via United Nations)

The announcement Saturday came days after world leaders began meeting in Paris for the COP21 summit. Their aim is to reach an international deal on greenhouse gas emissions and climate change.

This draft is the first step in that process. But it's nowhere near its final form. Most provisions have multiple options for how they should work, or just temporary placeholders.

And many developing countries are unhappy with the way the talks are going.

They argue their countries will be the most threatened by climate change as they lack the technology and money to deal with more extreme weather. (Video via NOAA)

But richer nations aren't exactly excited about the large amounts of money needed to help pay for developing nations to move toward cleaner energy, as well as helping them cope with climate change. (Video via YouTube / David Laundra)

It's also just plain difficult to get every country to play by the rules that will be set up once a final deal is reached.

Which is why one of the main goals of this climate deal is to get countries to agree to a five-year review plan that would see each nation come together every five years to help keep everyone on track. (Video via CCTV)

Now, negotiators must work out all these kinks before the conference ends in less than a week. No small task for such a massive agreement.