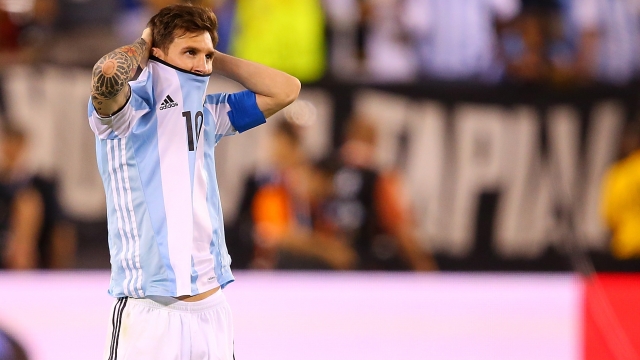 The international playing career for Lionel Messi seems to be over. The soccer star announced on Sunday he is retiring from Argentina, his national team.

"I think this is best for everyone. First of all for me, and then for everyone. ... It's very hard, but the decision is taken. ... There will be no going back," Messi said after Argentina's Copa America loss to Chile.

Messi was visibly emotional after Argentina lost 4-2 to Chile in a shootout. Messi, Argentina's captain, was called upon to take the team's first penalty kick but sailed it just over the crossbar.

Messi has dominated international competition since first joining Argentina in 2004, but it's clear that Argentina's struggles in big international games is wearing on him.

He has yet to win a Copa America final or a World Cup.

And Copa America championships have been especially frustrating for Argentina recently. They've finished as the runners-up four of the last five times.

In 2011, when Argentina hosted the tournament, they were eliminated in the quarter-finals.

But don't completely rule out Messi reconsidering what he said. The 29-year-old just became Argentina's top scorer of all time, and he clearly has plenty more soccer to give.

And he's got at least one teammate pulling for him. Goalkeeper Sergio Romero said he hopes Messi reconsiders his decision and said, "I can't imagine a national team without Messi."

Regardless of his international decision, Messi is still expected to play for FC Barcelona.

Argentina's next major international tournament would be the 2018 World Cup in Russia. Will Messi be in attendance?