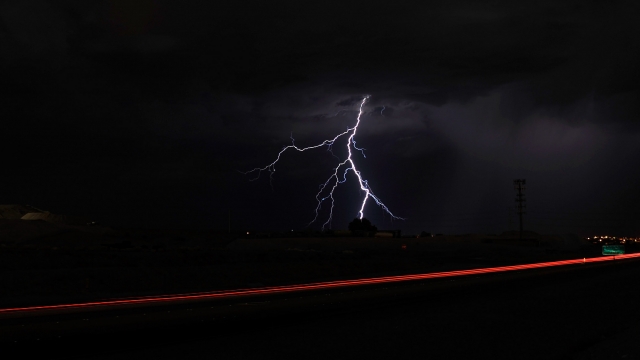 SMS
Lightning Makes For A Terrible Renewable Energy Source
By Evan Thomas
By Evan Thomas
June 9, 2016
Lightning is hot and fast — but it doesn't carry enough energy to be a useful source of renewable power.
SHOW TRANSCRIPT

Lightning is an impressive, energetic force of nature — so why aren't we using all that raw power to run our homes? Two reasons:

For one thing, lightning is unpredictable and really, really fast.

The National Oceanic and Atmospheric Administration estimates Earth gets about 44 cloud-to-ground lightning strikes a second, mostly in the tropics. But it's hard to predict exactly where they'll hit.

And capturing them would take a lot of hardware, like capacitors that could stand the brief but very high energies without frying and rectifiers to manage both positively and negatively charged strikes — which is impossible to guess until a strike actually happens.

The second part of the answer: It's hot and loud and bright, but lightning doesn't carry as much energy as you might think.

One company built a lightning harvester to collect energy from strikes. It was supposed to power a 60-watt bulb for 20 minutes, but officials said it didn't attract enough strikes to be viable.

MIT engineers say the average strike contains about a quarter kilowatt-hour of energy — around 3 cents worth of electricity at current prices.

If you use NOAA's numbers, lightning only generates about 347 gigawatts of power per year — a fraction of what other renewable resources can provide.

So thunderstorms may be impressive, but if you want to capture that energy, you're better off using the wind that whips up the storm in the first place — or even from the sun that drives the planet's winds.