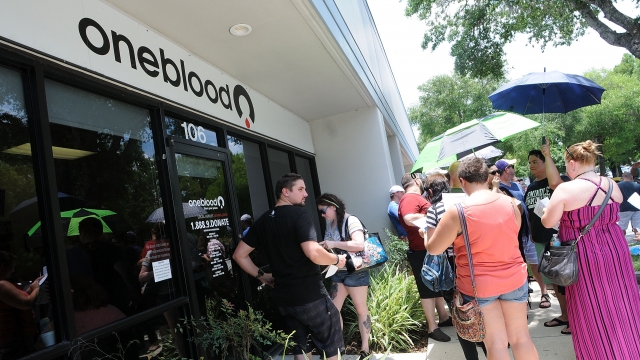 By Grant Suneson
June 12, 2016
In the wake of the Orlando shooting, LGBTQ advocates call for changes to the FDA policy against sexually active gay men donating blood.
SHOW TRANSCRIPT

After the mass shooting in Orlando that killed 50 and injured dozens more, hundreds of people flocked to blood donation centers.

But many people in the LGBTQ community are upset that they aren't allowed to help the victims who were at Pulse, the gay nightclub where the shooting occurred.

Until last December, the Food and Drug Administration banned all gay or bisexual men from donating blood due to fears of HIV-infected blood.

The FDA revised its recommendations, but many advocates think they still discriminate against gay men. The agency urges blood centers to refuse donations from "a man who has had sex with another man during the past 12 months."

One gay man from Orlando told USA Today, "I was frustrated that I thought I wouldn't be able to donate just because I am gay. It's going to be frustrating that I can't do this humanitarian act for my community."

After some false reports that the FDA ban was being lifted, Orlando blood donation center OneBlood tweeted that FDA guidelines were still in effect.

Despite the guidelines, donation centers reported that they were completely full for Sunday. Still, OneBlood urged donors to schedule appointments for the next few days to replenish the supply, requesting type O negative, O positive and AB plasma.

This video includes clips from WOFL, WFTV, Orlando Sentinel and Stringr and images from Getty Images and Twitter / @my1blood.