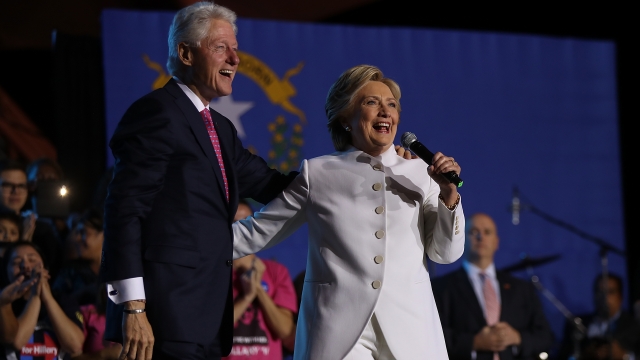 A woman at a town hall event last year asked Hillary Clinton, "[You] say that all rape victims should be believed, but would you say that about Juanita Broaddrick, Kathleen Willey and/or Paula Jones?"

Those are the names of some of the women who have accused Bill Clinton of sexual assault and rape — accusations that have resurfaced during Hillary Clinton's presidential run.

"Well, I would say that everybody should be believed at first until they are disbelieved based on evidence," Hillary Clinton said in response to the question.

Hillary Clinton appeared prepared for the question — she didn't pause. But her campaign was apparently still trying to figure out how to address the issue, according to a hacked email released by WikiLeaks.

An adviser to the Clinton campaign sent an email to senior staff over a month after the town hall.

It included a list of questions Hillary Clinton might face from the media. Four of the questions were about the allegations over Bill Clinton's conduct.

One of those questions is strikingly similar to the one Hillary Clinton got at that December 2015 townhall.

Podesta's response — if there was one at all — doesn't appear to have been published by WikiLeaks.

Based on Hillary Clinton's response to the topic during debates with Donald Trump, it seems the campaign decided to avoid tackling the issue head-on.

"Bill Clinton was abusive to women. Hillary Clinton attacked those same women," Trump said during the second presidential debate while responding to a question about his lewd comments on a recently leaked "Access Hollywood" video.

"So much of what he said is not right, but he gets to run his campaign any way he chooses," Hillary Clinton responded. "... I am reminded of what my friend Michelle Obama advised us all: 'When they go low, you go high.'"