Latest Iran Nuclear Talks: Why The Pressure Is On 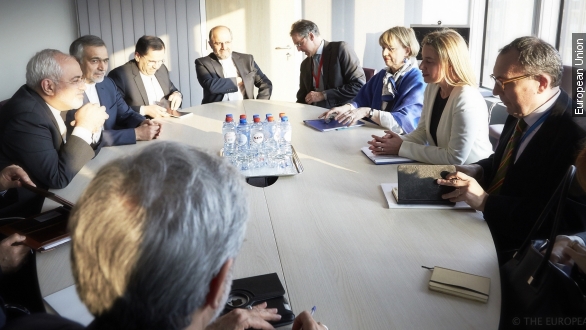 March 31 is the deadline for nuclear talks with Iran.

On Sunday, Secretary of State John Kerry announced he'd be extending his stay in Switzerland to continue talks with Iran and the foreign ministers of five other countries. (Video via RTS)

The parties involved in the talks haven't revealed many details about how close they are to a deal, except to say: (Video via Al Jazeera)

"As you know we have never been so close to a deal," said European Commission Vice President Federica Mogherini.

Still, if a deal doesn't materialize by the self-imposed deadline, it probably wouldn't be the end of the world. (Video via France 24)

Twice last year, negotiations passed their self-imposed deadlines, and all that happened was the target date for a deal was extended to June 30. (Video via Press TV)

There are some factors that would increase the urgency of progress in talks, though, not the least of which is the U.S. Congress.

Between Sen. Tom Cotton's open letter to Iran and the threat of further sanctions against it, Congress — congressional Republicans in particular — have been increasing pressure on the administration. (Video via Office of Sen. Tom Cotton, U.S. Senate Republican Conference)

A writer for Foreign Policy argues, "Getting Tehran to agree to specific provisions in writing could be essential to convincing U.S. lawmakers to hold off on legislation under consideration in the Senate that would impose new sanctions."

Add to that the increased instability the conflict in Yemen has brought to the region and the fact that the U.S. is helping in strikes against Iranian-backed rebels there, and progress in the talks suddenly seems more important. (Video via Al-Masirah, Saudi TV 1)

An unnamed diplomat told CNN Saturday the talks had hit a snag, with Iranian officials refusing to move on some key sticking points like the rate of relief from current sanctions Iran would get if it agreed to a deal. (Video via CNN)