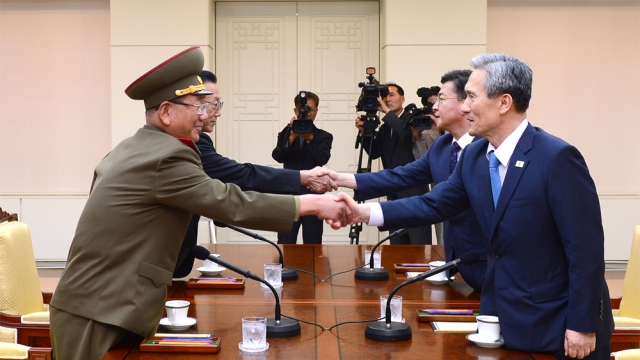 North Korea has been in the news in recent months for testing missiles capable of carrying nuclear weapons. But on Sunday, Kim Jong-un said the country will work to denuclearize the world and even renew ties with enemy countries.

At the first congress of North Korea's Workers' Party since 1980, Kim said Pyongyang "will faithfully fulfill its obligation for non-proliferation and strive for global denuclearization."

But that statement seems at odds with the country's military agenda. Its aggressive missile testing has concerned both South Korea and the U.S.

And Kim's remarks at the congress contained some veiled threats. He said North Korea "will not use a nuclear weapon unless its sovereignty is encroached upon by any aggressive hostile forces with nukes," though it's tough to tell exactly what his definition of encroachment is.

BBC's Stephen Evans wrote, "Is he saying that a nuclear North Korea would only strike if attacked or might it be something less than that? It is not clear."

But there's still reason to think Kim could be moving the country in the right direction. In the same speech, he laid out a five-year plan to boost the nation's economy.

The plan is short on details but looks to focus on increasing North Korea's power output and industrialization.

The economy's main issue is that it's being stifled by U.N. sanctions. So unless North Korea dismantles its nuclear program, any new economic strategies would only take the country so far.