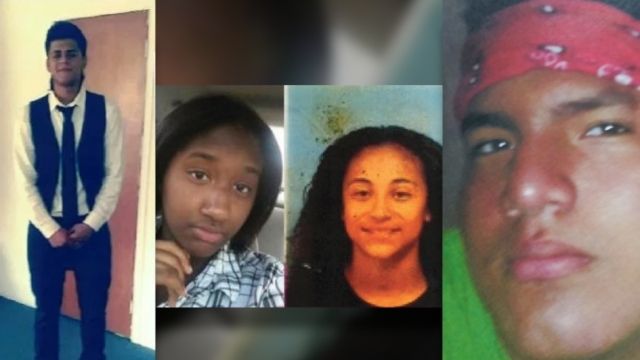 These two friends are just half of the students one New York high school buried last month.

Four students from Brentwood High School on Long Island were found dead just days apart. The two young women had apparently been walking together. The two young men had been missing for some months.

SEE MORE: Trump Says There's A Surge In Violence. Here Are The Numbers.

Law enforcement officers believe there was "gang involvement" in the killings.

But two weeks later, it appears there haven't been any arrests made.

Community members believe the gang responsible is MS-13. Its members have been suspected of over a dozen murders in the past seven years.

According to both The New York Times and Fox News, the killings have highlighted a heated debate about immigration in the community.

The immigration issue comes into play because MS-13 has roots in El Salvador. And residents told the Times an influx of Central American immigrants might be inflaming that gang's violence.

According to ABC, the violence carried out by gangs in El Salvador, including MS-13, has led people to flee the Central American country.

The problem is, many of the people looking to leave El Salvador behind come into the United States illegally.

Some of those people wind up in MS-13 here in the states. Others end up targets of the violence they tried to leave behind.

Police and school officials announced they are taking extra precautions to keep students and the community safe.

The school now has metal detectors, and the school's superintendent told parents their children shouldn't wear royal blue, which is the MS-13 color. More police are also patrolling around the school.

But that hasn't quelled the fears of some.

"When I heard this news, I was like pretty devastated because I'm like, 'Who else is going to be next?' you know," a student told told WMBC.