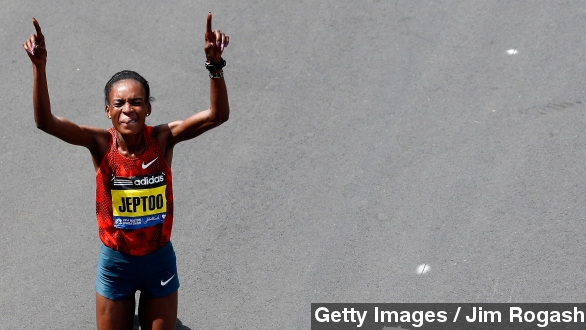 Three-time Boston Marathon and two-time Chicago Marathon winner Rita Jeptoo has been suspended from running for two years after failing a drug test.

Jeptoo tested positive for banned substances back in September. She claimed those substances could have been in her system due to her hospitalization following an accident.

The ban means the World Marathon Majors, which include the Boston and Chicago marathons, will have the right to force Jeptoo to repay her winnings. And Jeptoo's just one name on a growing list of Kenyan athletes who have been disqualified for doping.

Jeptoo is now the 45th Kenyan athlete to fail a drug test and the 19th to test positive for banned substances since 2012.

And there's growing concern that this spike in doping is tarnishing Kenya's athletic reputation.

Kenya's ability to perform drug tests has historically been very poor; the closest World Anti-Doping Agency-accredited blood testing facility to Kenya is in South Africa, which makes it extremely difficult to analyze samples.

"There was always likely to be a point where Kenyans got sucked in to more Western values, where sport is more like a business, and some people try to win at all costs, with less loyalty to their country or athletic fraternity," Olympian David Rudisha told The Irish Times.

Pharmacists and doctors in Kenya have also been called out for increasing the use of drugs among athletes by writing prescriptions for performance-enhancing drugs, disguised as medical treatments.

Athletics Kenya confirmed on its Facebook page that Jeptoo will be banned from competing until after October 29, 2016. Jeptoo was supposed to receive a check from the World Marathon Majors the same weekend as 2014's New York City Marathon, but the ceremony was postponed after the doping news first surfaced.