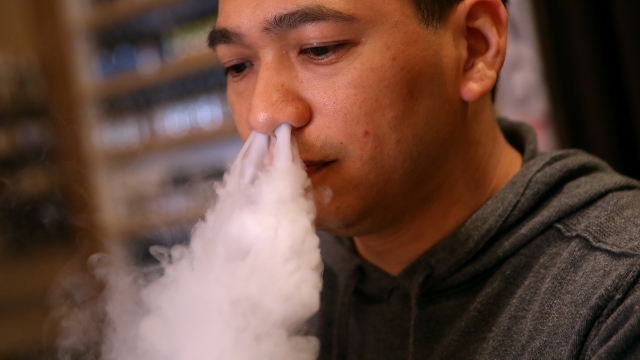 SMS
Just Because E-Cigs Are Better For You Doesn't Mean They're Healthy
By Grant Suneson
By Grant Suneson
July 27, 2016
A new study refutes the idea that e-cigarettes are a healthy alternative to smoking. Scientists found two undiscovered chemicals in e-liquids.
SHOW TRANSCRIPT

If you're one of the estimated 9 million Americans who regularly uses electronic cigarettes, we've got some bad news for you.

Researchers from the Lawrence Berkeley National Laboratory examined the chemicals that you're actually ingesting when you vape. The results showed that e-cigarettes can carry many of the same risks as regular combustible cigarettes.

Researchers found that 31 different toxic chemicals are present in e-cigarette vapor. Like regular cigarettes and tobacco products, many vapor products contain chemicals that can cause cancer.

The study also discovered two chemicals, propylene oxide and glycidol, that had never been found in e-cigarettes before. Both compounds are listed as probable carcinogens.

A press release for the study read in part: "Advocates of e-cigarettes say emissions are much lower than from conventional cigarettes, so you’re better off using e-cigarettes …  but the problem is, it doesn’t mean that they’re healthy. Regular cigarettes are super unhealthy. E-cigarettes are just unhealthy."

But if you just have to have your e-cigarette, the study did find a few options to make each puff less harmful. Vapor products were found to be unhealthier at higher voltages, since more voltage means more heat and more chemicals being released.

Also, the older your device is, the more likely it is to release more chemicals. You could also get flavorless liquids because some flavoring agents were found to have additional health risks.

But even without the flavoring, the harmful chemicals propylene glycol and glycerin were found to be the most common ingredients in e-liquids.

This video includes clips from Fontem Ventures and CBS and images from Getty Images and Lawrence Berkeley National Laboratory.