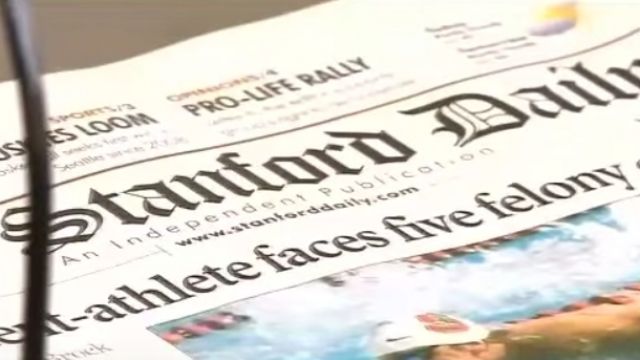 SMS
Judge In Brock Turner Case Removed From New Sexual Assault Case
By Calvin Stovall
By Calvin Stovall
June 15, 2016
At the DA's request, Judge Aaron Persky was removed from a case that charges a nurse with the sexual assault of a sedated patient.
SHOW TRANSCRIPT

The California judge criticized for giving Brock Turner a lenient sentence after he was convicted of rape has been blocked from the bench in another sexual assault case.

Tuesday, Judge Aaron Persky was removed from a case that charges a San Jose nurse with sexually assaulting a sedated patient.

Santa Clara County District Attorney Jeff Rosen blocked the case from being transferred to Persky, citing the judge's controversial ruling on Turner's case and his recent decision to dismiss a theft case before it could go before a jury.

In a statement, Rosen said, "We lack confidence that Judge Persky can fairly participate in this upcoming hearing."

Prosecutors wanted a six-year sentence for Turner, but Persky said the Stanford swimmer's age, state of intoxication at the time of assault and the media scrutiny the case received justified a sentence of six months in a county jail and three years probation.

Perksy graduated from Stanford University with two undergraduate degrees in 1984 and 1985. In March, Turner was convicted of three felony counts of sexual assault before Persky ruled that prison would have "a severe impact" on the 20-year-old.

A recall petition on Change.org with over 1.2 million signatures calls for Persky to be removed from his position as a judge because of the sentence he gave Turner.

One of the jurors who found Turner guilty wrote in a letter to the judge after sentencing, "The ridiculously lenient sentence that Brock Turner received ... makes a mockery of the whole trial and the ability of the justice system to protect victims of assault and rape."