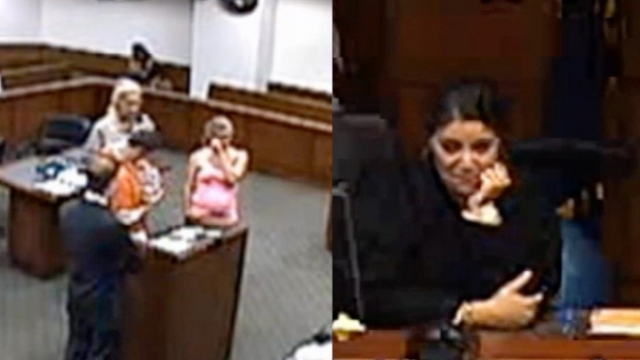 An inmate in Kentucky got to meet his 1-month-old son for the first time, thanks to Judge Amber Wolf.

The moment's gone viral — just like this video of the same judge a couple weeks ago.

"What is this? Am I in the Twilight Zone? What is happening?" Wolf asked someone who was off-camera July 29.

The internet first met Wolf at the end of July when another video of her went viral. That time, she was calling out jail staff for not giving an inmate pants and feminine hygiene products.

"I just want to tell you how incredibly sorry I am that you've been treated this way, and no one deserves this," Wolf told the defendant.

SEE MORE: This Defendant Wasn't Wearing Pants, And The Judge Was Livid

Now, Wolf is back in the headlines.

"I know you have a no-contact order between you and Ms. Roeder that I issued, and I'm not changing that. I'm making a temporary exception right in front of me, on the record, so that you can meet this baby," Wolf explained.

James Roeder and his wife, Ashley Roeder, are co-defendants in a burglary case.

The judge realized Roeder likely wouldn't have an opportunity to meet his son for a while, so she called him back to the courtroom and made it happen.

According to Wolf's LinkedIn profile, she's been a judge for more than a year. Before that, she was an assistant county attorney. She wrote on her page, "I have served on both sides of the criminal legal system with integrity, honor and compassion."

It seems like she has the compassion thing mastered.

"If you all aren't teared up, then you're just heartless," Wolf told people who were off-camera.