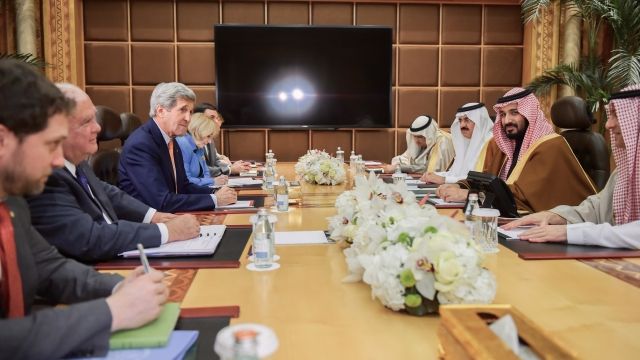 Secretary of State John Kerry met with Arab leaders to quell their fears over Iran-U.S. relations and to lay the groundwork for the upcoming peace talks over the Syrian conflict.

Recent tension between Saudi Arabia and Iran and the lack of a firm agenda has stalled those talks, but diplomats claim they will happen before the Jan. 30 deadline.

Kerry spoke with the Saudi Foreign Minister and the rest of the Gulf Cooperation Council to assure them they would continue to keep an eye on Iran, a supporter of the Assad regime. (Video via Al Arabiya)

The foreign ministers also confirmed that negotiations would happen next week in Geneva but did not specify which rebel groups would be involved. (Video via Al Jazeera)

Opposition group members and representatives from the Syrian regime would be present but would not have direct contact. Instead, the U.N. Special Envoy would act as the go-between. (Video via Kingdom of Belgium)

Kerry also promised that a multinational group of over 20 members would meet immediately after the meetings if any problems arise.

This video includes images from U.S. Department of State.