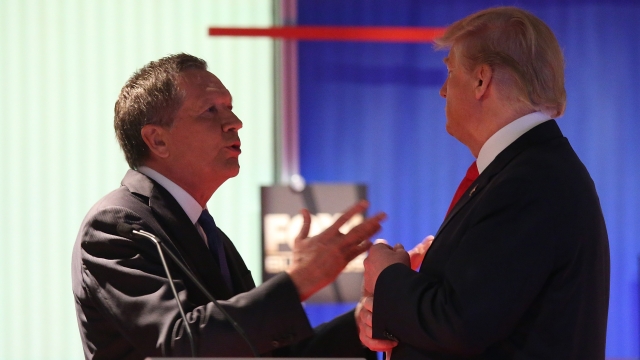 SMS
John Kasich Is Still 'Undecided' About Endorsing Donald Trump
By Briana Koeneman
By Briana Koeneman
May 17, 2016
Kasich said during an interview with CNN, "I'm for uniting, and I have to see him move to uniting. If he doesn't, I'm undecided here at this point."
SHOW TRANSCRIPT

"I'm for uniting, and I have to see him move to uniting. If he doesn't, I'm undecided here at this point. We'll see what he does. He has a chance to move to the positive side and unify this country," Kasich said.

During an interview with CNN's Anderson Cooper on Monday, the Ohio governor said Trump needs to be more positive if he's ever going to endorse him.

Kasich claimed he and Trump have "two different messages," but he will give Trump "more time" to change his tune.

During the past few months, Kasich has avoided saying whether or not he would support Trump as the Republican nominee.

But soon after one of Trump's rallies in Chicago turned violent back in March, Kasich told reporters Trump makes it "very, extremely difficult."

Even though he's been out of the race since the beginning of this month, Kasich told the outlet he still has no interest in becoming Trump's running mate.