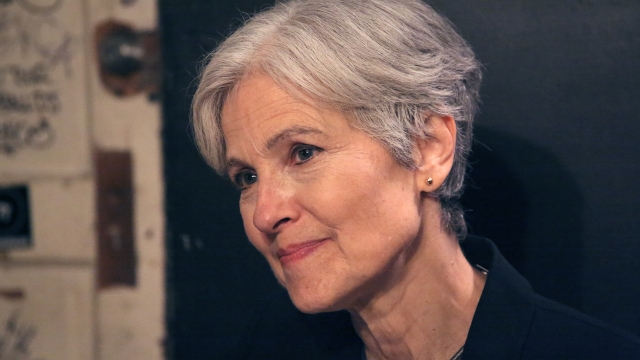 SMS
Jill Stein Channels FDR In Her Plans For A Green New Deal
By Eugene Daniels
By Eugene Daniels
September 16, 2016
The plan aims to solve the country's economic and climate crises at the same time.
SHOW TRANSCRIPT

"We call for an emergency Green New Deal, which is like the new deal that got us out of the Great Depression," Green Party presidential candidate Jill Stein told Newsy.

There are four basic categories of Stein and her party's Green New Deal. It promises an "economic bill of rights," "a green transition," "real financial reform" and a "functioning democracy."

But what do those phrases even mean? And why tie this plan to FDR's New Deal? We asked Stein.

"We have an economic emergency, and we have a climate emergency," Stein said. "The only way we can solve them is together. The funding would be provided nationally. So it's national dollars, but it's not a cookie-cutter program created by Washington, D.C."

Stein hasn't said how much this would all cost, but she says paying for it will be easy. The deal relies on things like cutting military spending by 50 percent and freeing Americans from student loan debt by having the Federal Reserve basically erase it. Yep, you heard me: erasing all the student debt.

"How exactly are we going to create a working economy when an entire generation is held hostage by debt?" Stein said.

Now, the president can't give marching orders to the Fed — it's an independent agency. But the president does appoint the chair and other members, so it's possible to get like-minded Green New Deal-lovers on the Fed.

But say the Fed is on board — Stein would then need serious buy-in from our hyper-partisan Congress. And a third-party president isn't likely to have a lot of support on Capitol Hill.

"In the best-case scenario, we turn the White House into a greenhouse and keep fighting because it's not going to be easy," Stein said.

Not easy is right. Getting to 1600 Pennsylvania Ave. would require a groundswell of public support like we've never really seen, and that's exactly what Stein is banking on.

"We don't have to go quietly into this dark night," Stein said. "Americans are not going to do that. We're going to stand up."