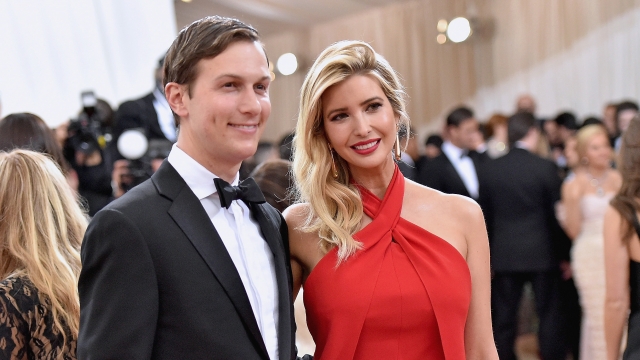 "My father-in-law is not an anti-Semite."

That's how Jared Kushner opened a letter to the public about his father-in-law, Donald Trump, who's received a flood of criticism for a tweet that showed Hillary Clinton in front of a pile of money and what looked like a Star of David.

Kushner went into his family's background with the Holocaust to argue there's a difference between "actual, dangerous intolerance" and what he called accusations of racism to "score political points."

Ultimately, Kushner's main argument was that he knows Trump while the media doesn't.

He was partly addressing Dana Schwartz, a journalist at the newspaper Kushner owns. In her open letter published the day before Kushner's, Schwartz noted Trump edited his tweet, replacing the star with a circle.

But he also added the hashtag "America First," which was the name of a movement led by white supremacist Charles Lindbergh during WWII.

Trump's original tweet was actually a repost. The meme with the star was published beforehand on a neo-Nazi internet message board.

Kushner argued his father-in-law has staff who tweet for him, and while they might have been careless, they don't poll-test every statement Trump makes.

For her part, Schwartz said she doesn't believe Trump is anti-Semitic. The problem for her is Trump didn't condemn those who are. Instead, he condemned the media.

Trump said Wednesday deleting the alleged Star of David tweet was a mistake and called those who were offended by it "sick."

This video includes clips from NBC, ABC and Donald J. Trump for President Inc. and images from Getty Images and the Library of Congress.