A Japanese Spacecraft Could Make Space A Little Cleaner 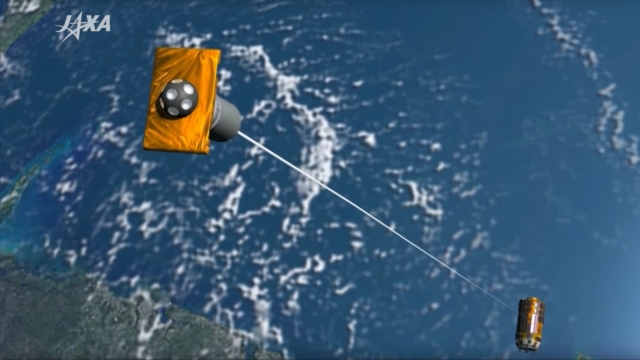 SMS
A Japanese Spacecraft Could Make Space A Little Cleaner
By Ethan Weston
By Ethan Weston
December 10, 2016
Space junk is becoming a big problem, but Japan's space agency thinks it has a solution.
SHOW TRANSCRIPT

Humans have really cluttered up the cosmos. It's estimated we've left behind over 100 million pieces of space junk since we first started exploring in 1957.

But Japan wants to clean up our act. The Japan Aerospace Exploration Agency launched a craft called Kounotori, which they hope will help collect some of that space debris.

SEE MORE: These Robots Want Earth (And Space) To Be A Cleaner, Greener Place

The launch is just a test, but here's how it should work: A magnetic tether about six football fields in length will be released from the ship. Then the energy the tether creates should slow space junk enough that it'll naturally fall back to Earth and burn up in the atmosphere.

The Kounotori craft is also on a mission to deliver supplies to the International Space Station. The space debris portion of its mission will happen after it leaves the ISS.

Space junk can zip around Earth at speeds as high as 17,500 mph, and that's risky for the stuff in orbit we still use. Plus, junk can create more junk by breaking up into smaller pieces.

In fact, in August 2011 the crew aboard the International Space Station almost had to evacuate because a small piece of debris shot by the station with very little warning. Not long after, the National Research Council said space debris reached a "tipping point."

The European Space Agency is planning a similar mission for 2023 but will use a giant net to capture debris and burn it up in the atmosphere.