Ivanka Trump Took Care Of Some (Fashion) Business At The RNC 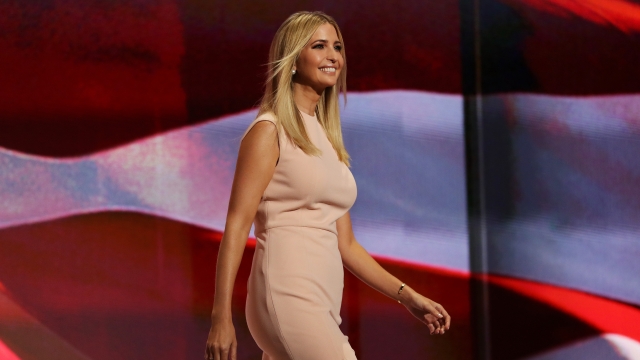 By Lauren Stephenson
July 23, 2016
Donald Trump's daughter showed off her fashion line when she took the stage Thursday at the Republican National Convention.
SHOW TRANSCRIPT

Ever the businesswoman, Ivanka Trump used her speech at the Republican National Convention to showcase her fashion brand.

The 34-year-old wore her own design Thursday night while introducing her father, who accepted the Republican nomination.

"My father and our next president, Donald J. Trump," Ivanka Trump said before her father walked on stage.

SEE MORE: What Was Different About This Year's Republican National Convention?

With tens of millions watching, it was no doubt a smart business move and appears to have paid off.

Less than 24 hours later, the dress, which retails for $138, was unavailable at Nordstrom and Macy's.

You may recall Macy's ended its relationship with Donald Trump last year after his controversial remarks on Mexicans and Latinos. Like her father's clothing line, most of Ivanka Trump's clothes are made in China.

There are conflicting reports as to whether the dress has been available and is just now sold out or if it is coming soon. Regardless, it has gotten a lot of attention and her brand will likely continue to as she wears more of her designs on the campaign trail.

It's not uncommon for fashions of famous political daughters and wives to sell out out. Michelle Obama and her daughters have drawn attention to brands they've worn, like J. Crew and Narciso Rodriguez. The difference is the Obamas haven't profited.

Trump launched her brand in 2007 with a jewelry line and has since expanded to include shoes, handbags, dresses and other apparel for the professional woman.

The Ivanka Trump Collection reportedly brought in $100 million in sales during the last fiscal year.