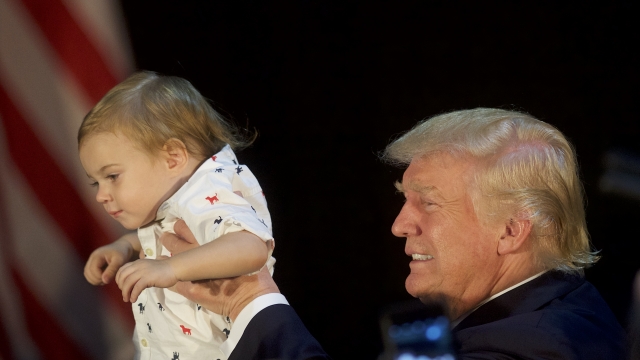 "The money that is put into these accounts can also be spent not only on childcare, but also child enrichment activities," Donald Trump said Tuesday.

After he said that, a baby squealed.

"See. We'll start with that child," Trump said pointing to a young boy.

How's that for perfect timing?

On Tuesday, Donald Trump unveiled his child care policy that would give six weeks paid leave to new mothers.

Apparently, 1-year-old Tristan Murphy liked the sound of it. And his response has gone viral.

And with less than two months left in the campaign, that's good for the Republican presidential nominee who's making a push to gain the support of suburban women. A recent poll shows Trump trailing Hillary Clinton with college-educated white women. In more recent elections, that group has favored Republicans.

One person who could help give him a boost is his daughter Ivanka Trump.

"I have three young children myself, and I'm grateful daily for the means to pursue two of my dreams: being a mother and investing in a career that fulfills me. I recognize that far too few women can say the same for themselves," Ivanka Trump said.

Ivanka Trump has been one of her father's biggest supporters and one of the campaign's greatest assets.

From her highly anticipated and well-received speech at the Republican National Convention to the countless interviews she's done to soften her father's image, it's no surprise CNN covered her speech live Tuesday night.

"As a society, we need to create policies that champion all parents, enabling the American family to thrive," Ivanka Trump said before introducing her father on Tuesday night.

The network "monitored" Trump's speech, breaking in to show him being introduced but not much else.