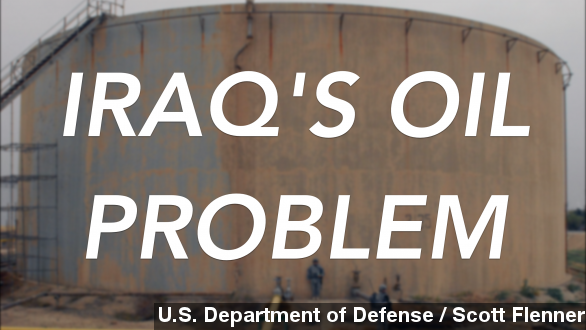 SMS
Iraq's Oil Problem
By Jake Godin
By Jake Godin
January 29, 2015
The low price of oil may be hurting other oil-based economies, but Iraq may take the biggest hit as it loses funding for its military.
SHOW TRANSCRIPT

Falling oil prices could make the fight against ISIS harder. (Video via U.S. Department of Defense)

Oil prices have plummeted about 60 percent since last summer when they were about $115 per barrel. Prices are now below $50 a barrel. (Video via YouTube / Dashcam Viewer)

Because of the drop, the economies of oil-reliant countries such as Venezuela, Russia and Iraq have suffered. (Video via Ukraine Today)

But unlike Russia or Venezuela, Iraq is also trying to muster its army in fighting the militant jihadist group ISIS. (Video via YouTube / ولاية علي)

Iraq was cut off from a large portion of its military supplies with the fall of Mosul, Iraq’s second-largest city, last June. Low oil prices are only making rebuilding it and paying new soldiers that much more difficult. (Video via Sky News)

According to the World Bank, oil revenue makes up 45 percent of Iraq's total GDP. The country relies on the fossil fuel to fulfill 80-85 percent of its budget. (Video via U.S. Department of Defense)

Iraq's Prime Minister Haider al-Abadi made a plea for more supplies to nations in a special anti-ISIS coalition meeting in London and again just a few days later at the World Economic Forum:

"Our economy cannot sustain two major spending: One is to sustain our society who are depending on the central budget and two to sustain this awful war, which is taking a lot of our resources. We need help on this."

To be fair, Iraq is getting help from coalition members.

"I do disagree with the prime minister's comments," U.S. Secretary of Defense Chuck Hagel said in response to a question over Abadi's comments in London. "I would say even further, I don't think they're helpful. We have a coalition of over 60 countries that have come together to help Iraq. And I think the prime minister might want to be a little more mindful of that."

Still, Keith Johnson of Foreign Policy says the low oil prices could lead to further sectarian violence or future budget issues if the government curbs spending in other areas to focus more on military spending.