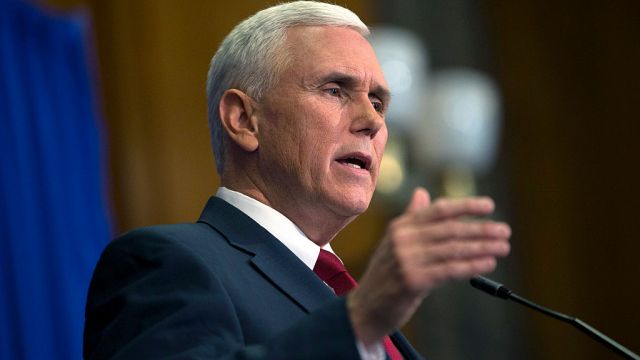 A report from The Washington Post says Trump and Indiana Gov. Mike Pence met for over an hour this weekend at Trump National Golf Club in New Jersey.

The report doesn't say that the meeting was specifically about the position of vice president, but sources told the Post the meeting was "warm and friendly" and a "getting to know you thing."

Pence, who actually endorsed Ted Cruz during the primaries in April, is believed to be on Trump's shortlist of VP options.

While Pence backed Cruz, Trump still won Indiana by a wide margin. Pence never exactly wrote Trump off, though. Here he is during his Cruz endorsement:

"I am also particularly grateful that Donald Trump has taken a strong stand for Hoosier jobs," Pence said on WIBC.

Trump, a longtime businessman, has said before that he's looking for more of a politician to serve as VP.

"I want somebody who can help me with government, so most likely that'd be a political person," Trump said during a CBN forum.

As the nation grows anxious over Trump's potential running mate, rumors about the list of VPs being considered seems to be growing as well.

Reports also say Trump could name his running mate prior to the convention, which takes place in Cleveland in roughly two weeks.

This video includes clips from WRTV, the Republican National Convention and images from Getty Images.