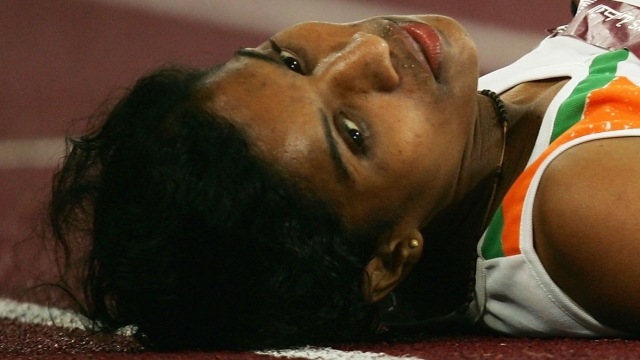 SMS
Indian Marathoner Says She Barely Got Any Water At Her Olympic Race
By Briana Koeneman
By Briana Koeneman
August 23, 2016
O.P. Jaisha collapsed soon after finishing the 26-mile race and was taken to a nearby hospital.
SHOW TRANSCRIPT

An Indian marathoner says Indian officials weren't there to give her water during her 26-mile Olympic race last week.

O.P. Jaisha told reporters Monday that she ran the event in "scorching heat." She collapsed soon after crossing the finish line and had to be taken to a nearby hospital.

The BBC quotes her as saying: "I fainted after the race. I was administered glucose, I thought I would die."

And she says Indian officials weren't aware of her condition until three hours later when they came looking for her at the hospital.

During an Olympic marathon race, each country normally has a fluid station about every 1.5 miles to make sure the runners stay hydrated.

But Jaisha says she had to rely on the official Olympic stations, which were about 5 miles apart.

According to the Association of International Marathons and Distance Races, runners should drink when they're thirsty.

But depending on the length and speed of the race, they need at least one cup of fluid per mile.

The Athletics Federation of India has denied Jaisha's claims.

A senior federation official told the media both Jaisha and her coach refused the organization's offer to have Indian officials give her fluids throughout the race.

Still, the Indian sports ministry said in a press release a two-member committee is investigating the allegations.