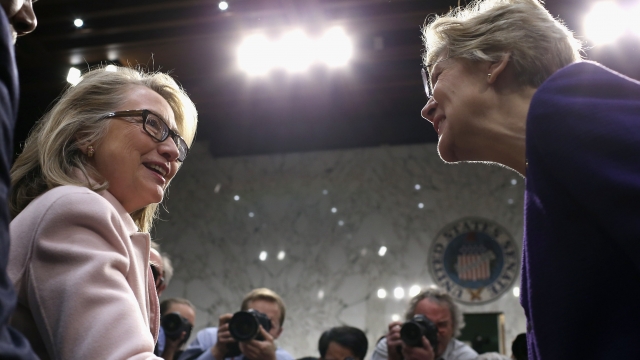 SMS
In Obama's Wake, Elizabeth Warren Endorses Hillary Clinton
By Eugene Daniels
By Eugene Daniels
June 9, 2016
The endorsement is a big step in helping the party unite behind the presumptive nominee.
SHOW TRANSCRIPT

"For 25 years, she's taken the incoming. The right wing has been throwing everything they possibly can at her. ... What she's done is she gets back up and she gets back in the fight," Warren said.

The endorsement has been a long time coming. Warren was the only Democratic female senator who hadn't endorsed Clinton. Throughout the primary, Warren had managed to weasel her way out of choosing between Clinton or her more progressive rival Bernie Sanders.

This comes just hours after President Obama became a public member of #ImWithHer, but in some ways, Warren's endorsement holds just as much weight as the president's, if not more.

Warren is a darling of the progressive wing of the party and always has been. Her seal of approval, though it was probably always coming, is a nod she finds Clinton palatable for a progressive agenda.

Sanders supporters are still mourning his loss to Clinton, but Warren's backing will likely start to heal the rift in the party and make unity a bit easier.