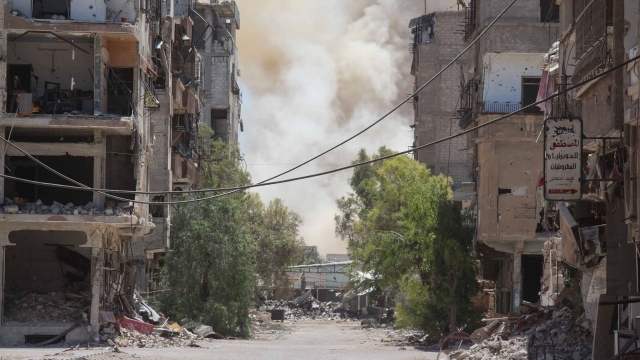 SMS
In Daraya, Hunger And Barrel Bombs Plague Everyday Life
By Jake Godin
By Jake Godin
July 27, 2016
The city of Daraya, Syria, used to have a population of around 80,000. Now, after years of a grueling siege, it only has 8,000.
SHOW TRANSCRIPT

And these are some of Daraya's people. They're tired. They have no food, they're being bombed and they think the world has turned its back on them.

Daraya was one of the first cities to rise up against President Bashar al-Assad's government in 2011.

Since 2012, the city's been under siege by the Syrian regime. Over time, rebels have gradually lost ground to the encircling troops. The most recent loss included all of Daraya's farmland. Now, the city's remaining population of 8,000 is left without a food source.

Daraya received its first medical convoy in June. According to the United Nations, more than 12,000 medical items were removed by the regime before the convoy was allowed to enter the city.

A week later, the World Food Programme was able to deliver food aid for the first time, although it was only enough for 2,400 people.

Almost immediately following the food delivery, the Syrian regime resumed dropping barrel bombs on the city. No other aid has been able to make it into the city since.

Activists in Daraya report multiple barrel bomb and surface-to-surface missile strikes daily. June alone had 748 barrel bombs, or an average of 25 a day. People are living in cellars to avoid the bombings.

Activists say Daraya has no ISIS or Al-Qaeda affiliates in it. The city is run by a local council, which administers various facets of Daraya, including schools, a hospital and even the militias defending the town.

Syrians in Daraya have recently been calling for a truce with the regime. So far, that hasn't happened.