If You Want To Interview The Donald, Don't Speak Spanish 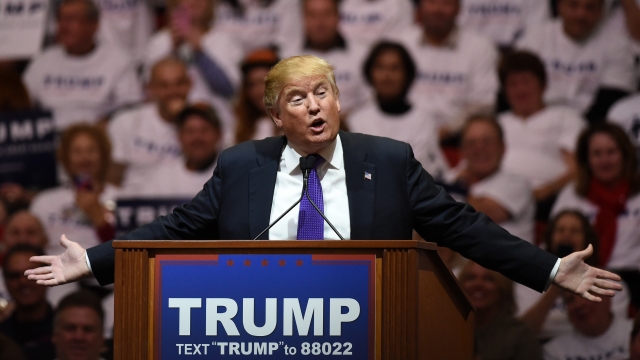 Donald Trump may be in hot water with the Spanish-speaking world, again.

BuzzFeed reports that freelance reporter Marcos Stupenengo was waiting inside Trump Tower for his scheduled interview with the GOP's presumptive nominee. Stupenengo took a phone call in Spanish, and after that he was told the Trump campaign had "no interest in taking part in an interview with him."

The BuzzFeed article cites a "source with knowledge of the incident" and includes an email quote from Stupenengo that says, "I can say that after 13 years of journalism worse things have happened to me."

Other media outlets have picked up the story, but everything thus far points back to BuzzFeed and its relatively vague source.

Trump, who has consistently criticized the media throughout his campaign, has not commented. Instead, he spent some of his Twitter time on Monday railing on The New York Times and its article about his treatment of women.

But this isn't the first time Trump has landed in hot water with a member of the Spanish-speaking press. In August, Univision's Jorge Ramos was kicked out of a Trump press conference in Iowa.

This latest incident isn't likely to help him in the polls — an April survey of more than 2,000 registered Latino voters found 87 percent had an unfavorable view of Trump.

This video includes images from Getty Images and clips from MSNBC and Infobae.