If The Mosul Dam Bursts, It Could Kill More People Than The Iraq War 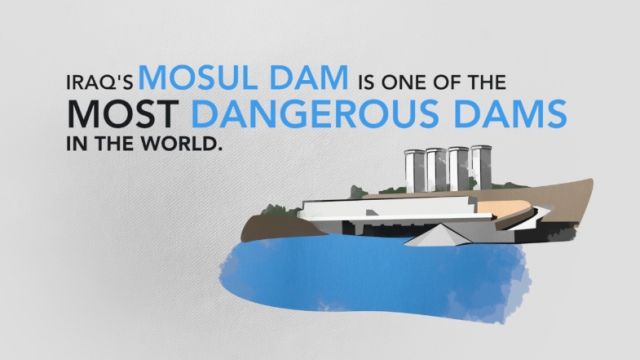 SMS
If The Mosul Dam Bursts, It Could Kill More People Than The Iraq War
By Jake Godin
By Jake Godin
May 5, 2016
Sometimes called the most dangerous dam in the world, the Mosul Dam could kill hundreds of thousands of Iraqis if it were to burst.
SHOW TRANSCRIPT

Iraq's Mosul Dam is one of the most dangerous in the world.

At capacity, it holds back about 11 billion cubic meters of water. If the dam bursts, in a matter of hours it could kill more people than the entire Iraq War. The U.S. estimates anywhere between 500,000 to 1.47 million lives would be at risk.

Many of them are in Mosul, Iraq's second-largest city. The city's been under ISIS control since 2014. The dam, about 26 miles northwest of Mosul, currently isn't.

That flooding would reach as far south as Baghdad.

The Mosul Dam is on top of a layer of gypsum and anhydrite.

Turns out, these minerals don't hold up too well against water, so the dam could fail if it's not maintained.

Engineers have used a technique called grouting to fill the cavities underneath the dam pretty much nonstop since it started operating in 1986.

But when ISIS took control of the dam in August 2014, the grouting stopped.

Grouting resumed after Kurdish forces chased away the ISIS fighters. But even now, the dam isn't maintained at the same level it was before.

There is some good news. After months of negotiations, the Iraqi government has hired an Italian firm to repair the dam over the coming months.

But that's only if the dam stays out of ISIS' hands.

This video includes clips from Al Arabiya and images from Getty Images and music from APM / Blood Work.