Just How Expensive Is The Damage From Hurricane Matthew? 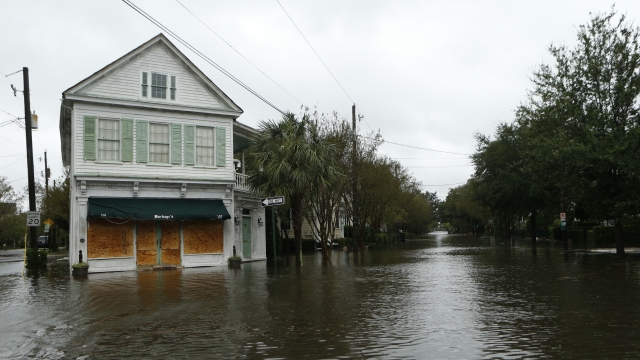 SMS
Just How Expensive Is The Damage From Hurricane Matthew?
By Lindsey Pulse
By Lindsey Pulse
October 9, 2016
Estimates right now range from $4 billion to 6 billion in property damage — and that's conservative.
SHOW TRANSCRIPT

At least $4 billion — that's how much researchers say Hurricane Matthew has caused in property damage on the East Coast. And that's a conservative estimate.

CoreLogic released data Saturday estimating the cost of wind and storm damage from Matthew on insured homes and commercial buildings. At best, the cost will be $4-$6 billion.

But those estimates don't include additional water damage or even business interruptions that will likely take place in the coming weeks.

With all of that considered, Moody's analytics reportedly predicts the total economic cost could rival the $70 billion worth of damage caused by Superstorm Sandy.

Hurricane Matthew made landfall in South Carolina on Saturday. At the time, it was a Category 1. Floodwaters caused the closing of several major roads and left millions on the coast without power.

The storm has also been blamed for more than a dozen deaths in the coastal states it hit. Newsy's partners at WPTV report Hurricane Matthew has been downgraded to a post-tropical cyclone.

An official death toll in the U.S. hasn't been released, but The New York Times reports seven people died in North Carolina, three people died in Georgia and at least six deaths were recorded in Florida. All four states have declared a state of emergency.

The U.S. damage is only a fraction of the damage Hurricane Matthew caused in Haiti. Early estimates put the death toll there at more than 800, and officials told the BBC some areas of the country have been completely leveled.

Hurricane Matthew hit the Caribbean nation the morning of Oct. 4 at a Category 4. Haiti had not seen a hurricane of that magnitude since 1964.