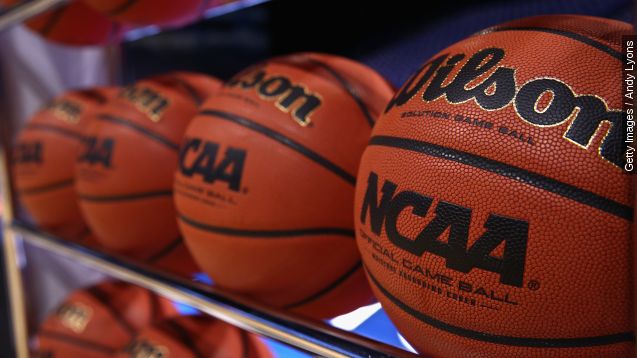 College basketball fans could see more running and gunning and less time-burning play calling next season thanks to changes approved by the NCAA.

Chief among those men's Division I changes: shortening the shot clock from 35 to 30 seconds.

The thinking behind a shorter shot clock goes like this: teams will have less time to shoot, which means there will be more possessions, which could mean faster-paced, higher-scoring games.

According to the NCAA, teams averaged just 67.6 points per game last season. That's historically low and not a stat that bodes well for a sport accused of being a bit sluggish at times.

Take, for example, the University of Wisconsin men's basketball team — the 2nd place finisher in this year's NCAA tournament. Sports Illustrated's Brian Hamilton wrote back in May that the Badgers had an efficient offense but averaged "the sixth-fewest possessions per game nationally."

The shot clock change is just one of many ways the NCAA is trying to re-invigorate Division 1 men's basketball. But there are still concerns as to how the changes could alter the sport.

Part of what makes college basketball fun to watch is the diversity of playing styles with different teams. A Yahoo sports writer says that level of diversity could erode with a much shorter shot clock and give way to "homogeneity" — he uses the NBA's widespread use of man-to-man defense and pick-and-roll offense as an example.

Aside from the shot clock, the NCAA voted to extend the restricted-area arc from three to four feet — which could cut down on collisions under the basket — and get rid of the five-second closely guarded rule. You might find that your favorite schools will have a harder time playing defense next season.

We don't quite know what Division 1 men's basketball will look like with all these changes, but many writers seem to agree they'll most likely be good for gameplay.

And there's at least one rule change we can all get behind: next season, refs can penalize players who fake fouls or flop.