How Goldman Sachs Is (Inadvertently) Swaying The Democratic Primary 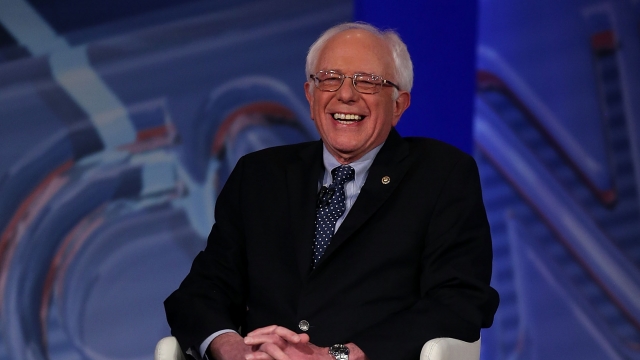 SMS
How Goldman Sachs Is (Inadvertently) Swaying The Democratic Primary
By Eugene Daniels
By Eugene Daniels
February 4, 2016
The Sanders campaign is raising money off comments the bank's CEO recently made.
SHOW TRANSCRIPT

"Here's a promise: If elected president, Goldman Sachs is not going to bring forth a secretary of treasury in a Sanders administration," the presidential candidate said at the NBC presidential debate in January.

"You have Blankfein from Goldman Sachs. I guess he's a billionaire now, making huge amounts of money after destroying the economy," he told Bloomberg Business.

And it seems like the feeling is at least a bit mutual. Goldman Sachs CEO Lloyd Blankfein shared his concerns about a possible Sanders presidency.

"It has the potential to be a dangerous moment. Not just for Wall Street, not just for people who are particularly targeted, but for anybody who's a little bit out of line," Blankfein said.

Well, as you can imagine, a Wall Street CEO calling Sanders "dangerous" is a great thing for the Vermont senator. His campaign jumped on the fundraising opportunity. Sanders supporters got this email saying Blankfein's "arrogance has no end." (Video via PBS)

Goldman Sachs has been popping up in the Democratic primary for months now. Hillary Clinton has faced criticism for receiving hundreds of thousands of dollars in speaking fees from the bank and accusations of being cozy with Wall Street.

"Well, I don't know. That's what they offered." she answered.

But Clinton has defended herself by saying all critics have to do is look at how Wall Street interests are spending "a lot of money trying to defeat" her. But despite the tough talk, according to OpenSecrets.org, Clinton's received about $2.5 million from the "commercial banking industry" or Wall Street. (Video via Hillary for America)

So what do voters think? A recent nationwide survey found only 29 percent of those polled said Clinton would be able to better deal with Wall Street; 46 percent chose Sanders.