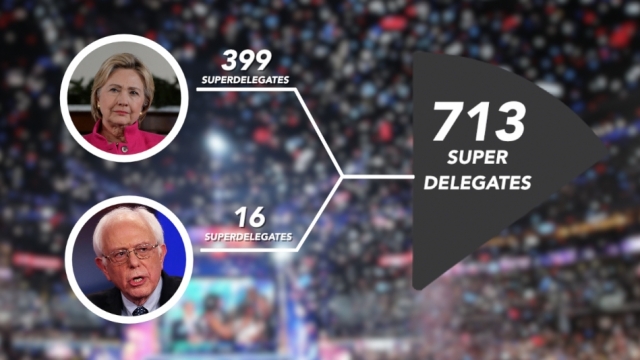 "We won, because we harnessed the energy and the excitement that the Democratic Party will need to succeed in November," Bernie Sanders said after winning the New Hampshire primary.

Bernie Sanders' path to the Democratic nomination could be made even more complicated by people called superdelegates.

Boiled down to the simplest definition, superdelegates are people who can vote for whomever they choose at the Democratic National Convention, no matter what happened in their home state.

Currently, there are about 4,764 delegates overall. 713 of those, or about 15 percent, are superdelegates. Right now, Hillary Clinton has almost 400, with Sanders having less than 20. But who are they?

If this is at all confusing, you can blame the 1968 convention.

Protests and riots broke out after Hubert Humphrey was nominated, causing the party to change its nomination process and give more power to the states and normal citizens. By the '80s, Democratic elites began to feel completely left out of the process and worried the party would inadvertently end up with weaker nominees —enter superdelegates.

Superdelegates have free rein but generally line up behind the candidate who wins the most delegates from state primaries and caucuses, no matter what side they're on at the beginning of the election season.

In the 2008 primary, Clinton also started out with the most superdelegates. But as another virtually unknown senator surprised the country and began to win, some of her superdelegates began to bolt.

So yes, currently Clinton still has quite the superdelegate backing, but we're still at the very beginning of what could be a long primary. If the Vermont senator's coalition builds, and he's able to grab more primary and caucus wins, he may find himself with the establishment he rails against so much actually on his side.

This video includes images from Getty Images and includes clips from NBC News, C-SPAN, Hillary for America and Bernie 2016.