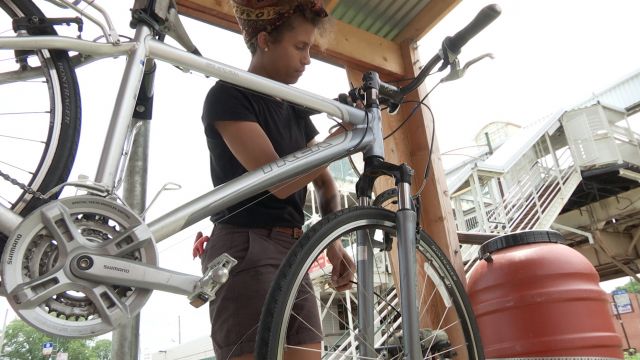 SMS
How A Bike Shop Plans To Revitalize Chicago's Old 'Black Metropolis'
By Jamal Andress
By Jamal Andress
June 27, 2016
The Bronzeville Bike Box is one of several businesses the Urban Juncture Foundation is hoping will bring more people and more money to the area.
SHOW TRANSCRIPT

"No. 1 question, 'What's going on here?' ... It's a big shipping container with a weird awning. A bunch of different kind of people on bikes," Bronzeville Bike Box Manager Samantha Scipio said.

The Bronzeville Bike Box is kind of hard to miss. It's a makeshift bike shop on the Chicago's South Side.

"That's the initial reaction, then once they see what it is they're like, 'Oh, I get it. I've never seen anything like that around here,'" Scipio said.

It's in a Chicago neighborhood where the median household income is less than $17,000 and more than 60 percent of the population lives below the poverty line.

In the 1920s, though, Bronzeville was considered Chicago's "Black Metropolis" — the center of black business and culture in the city. The Chicago Defender, Ebony Magazine and Soft Sheen are all black businesses that got their start in Bronzeville.

"It's like I'm biking here from work and I pass Ida B. Wells' house. That's awesome! This community is really, really rich, and it still is really rich and ripe with amazing people," Scipio said.

You may not know it by looking at the old shipping container, but the Bike Box is part of an effort to revitalize this historic area.

"It generates a certain amount of energy on the streets and on the sidewalks of people coming through and enjoying different businesses. People are usually pretty excited to see us and realize it's a resource in their community," Scipio said.

The Urban Juncture Foundation that created the Bike Box has already opened a jerk chicken place and has plans for several other businesses in the area.

"It definitely takes a lot of energy and you have to have a certain amount of passion. Like there are days where I'm like, 'Oh my God, I gotta go sit at this Bike Box all day and it's six hours and it's hot outside.' For me bikes are this beautiful gateway to being healthy and being active and living longer, which is something that's so important to me and to my community, so it's worth it," Scipio said.

This video includes a clip from Ebony Magazine and images from the Library of Congress. Music provided courtesy of APM Music.