A Texas Man Found A 300-Pound Alligator — In His Garage 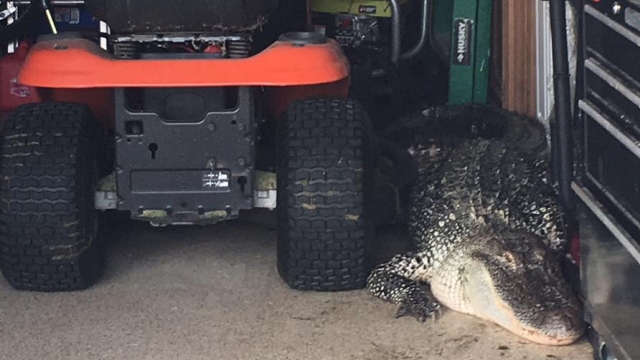 In more news of alligators wandering where they don't belong, this 300-pound gator decided it wanted to hang out in a southeastern Texas garage.

The gator was found in Fulshear, Texas, after homeowner Doug Dallmer opened his garage door to find the massive reptile hiding right next to his lawn mower.

SEE MORE: Disney World Is Building A Wall To Prevent Another Alligator Attack

Dallmer called local police, who brought an alligator wrangler to the scene.

And based on its reaction, the gator didn't seem too keen on leaving. The reptile can be seen thrashing around in a lasso and hissing at the wrangler.

Local news station footage shows debris littering the garage floor after the gator was taken away.

This isn't the first time someone in this area has had a run-in with a giant reptile. In March, a woman in Richmond, Texas, found an 8-foot gator sitting on her porch. That gator was captured and transferred to a sanctuary.

The gator in Dallmer's garage will be taken to the same place. As for how Dallmer's feeling now? He told reporters the situation was "a little nerve-wracking."

This video includes clips from KTRK, KPRC and clips and images from the Fulshear Police Department. Music provided courtesy of APM Music.