House Democrats Might Be In Some Trouble When Congress Gets Back 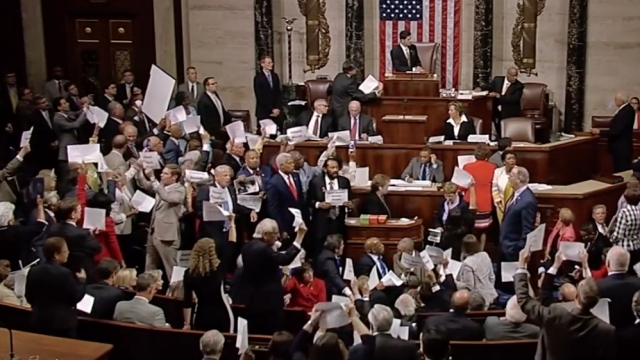 SMS
House Democrats Might Be In Some Trouble When Congress Gets Back
By Eugene Daniels
By Eugene Daniels
September 3, 2016
Sources say House leadership is mulling over some kind of punishment for a sit-in that happened in June.
SHOW TRANSCRIPT

Remember that time Democrats held a sit-in on the floor of the House and wouldn't let Speaker Paul Ryan really get any work done? Well, it looks some type of punishment may be on its way for the disruption.

GOP sources say Ryan and other Republican leaders are looking into ways to punish the Democrats who participated. It's not clear what is going to happen, but it'll likely be some kind of public reprimand or a resolution about how something like this won't be allowed in the future — especially since the Democrats broke chamber rules about having cell phones on the floor to live stream the protest after the House feed was cut.

One Republican told Politico whatever happens will be to "protect the permanent employees of the House, who the Democrats treated with contempt."

Republicans have been furious about the Democratic takeover for months, so this isn't a surprise. Ryan has been one of the most outspoken, calling the sit-in a "stunt" in press conferences and interviews.

But Democrats have maintained the protest of congressional inaction on gun control was necessary; it came right after 49 people were killed in the Orlando massacre at a gay club in June.

All of this was pretty unprecedented, so it's anyone's guess what's coming down the pipe. Congress is set to return back from summer recess next week.