Hillary Clinton Is Probably Your Best Shot At 'Hamilton' Tickets 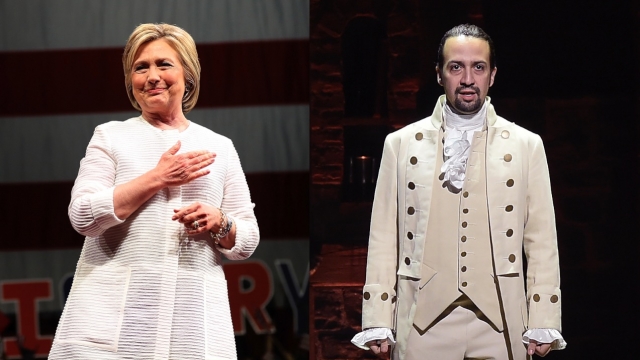 SMS
Hillary Clinton Is Probably Your Best Shot At 'Hamilton' Tickets
By Eugene Daniels
By Eugene Daniels
June 25, 2016
The fundraiser is another reminder of how differently the Clinton and Trump campaigns have approached fundraising and spending resources.
SHOW TRANSCRIPT

If, like most breathing humans, you're having trouble getting seats for "Hamilton," just tell the usher "I'm with her." You heard me right: Hillary Clinton is teaming up with the most popular show on Broadway.

By donating at least $1 to the campaign, you and a buddy are entered for a chance to watch "Hamilton" with your new bestie and a presumptive presidential nominee for no additional cost.

The team-up makes sense. Hamilton's creator, Lin-Manuel Miranda, is obviously a political activist in his own right and has made it clear he's not a fan of Donald Trump. Miranda is also an ardent supporter of the Democratic party and, after leaving "Hamilton" next month, will be trying to get out the vote in Hispanic communities.

But the raffle is also a huge reminder of how differently the Clinton and Trump campaigns have approached funding and spending in 2016.

Clinton's relied on star power quite a bit this campaign, from appearing onstage with Jon Bon Jovi to a more than $353,000 per couple fundraiser with George and Amal Clooney.

Trump hasn't really done any fundraising at all, touting his independence from donors and his ability to spend his billions on making sure he makes it to the White House. So his fundraising apparatus is basically nonexistent, leaving him with a little more than $1 million on hand compared to Clinton's war chest of more than $42 million.

Lack of funds wasn't a problem for Trump when he could rely on earned media coverage to propel him to the top of a crowded primary. But the general is a different story; Clinton and super PACs supporting her have outpaced the Trump campaign by millions of advertising dollars in several swing states.

Trump's approach is pretty unprecedented, but if there's one thing Trump's candidacy has taught us, it's that sometimes being unpredictable pays off.