Here's What The Presidential Candidates Love (And Hate) To Eat 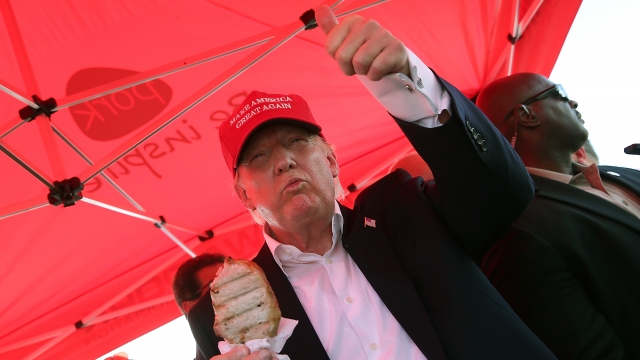 SMS
Here's What The Presidential Candidates Love (And Hate) To Eat
By Ryan Biek
By Ryan Biek
February 2, 2016
Which presidential hopeful eats jalapeños on the campaign trail? Who hates avocados? And who drinks a ton of water?
SHOW TRANSCRIPT

So you've done your research and can recite the top presidential candidates' views on the big issues. But how well do you know their eating habits?

Hillary Clinton gives a lot of credit to jalapeños. She told People magazine she started eating them during her husband's 1992 campaign and said, "I believe they keep me going!"

But some candidates' quirks lie in what they don't consume. Donald Trump reportedly doesn't drink alcohol, even though he's sold vodka under his name in the past.

Meanwhile, Marco Rubio has developed a reputation for loving — or perhaps needing — water to the extreme. The senator often makes jokes about it during speeches.

While Bernie Sanders' political views may be considered far-left, his declared love for pork chops and scrambled eggs during a People magazine interview might be considered pretty middle of the road.

And Ted Cruz avoids avocados at all costs. He may or may not be allergic to them, but he told The Des Moines Register he despises the fruit. No flip-flopping on that stance.