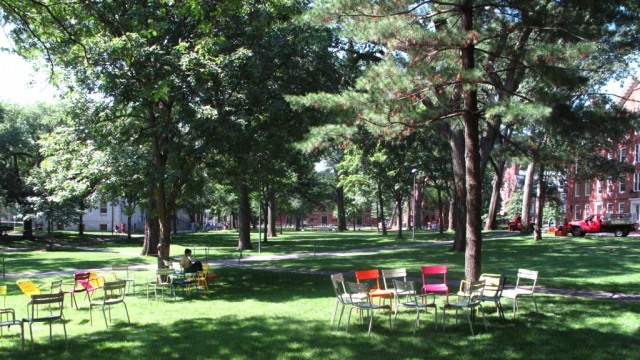 SMS
Harvard Plans To Punish Students Who Join Single-Gender Organizations
By Samantha Crook
By Samantha Crook
May 6, 2016
The clubs at the center of the debate have a reputation for being exclusive and having a largely white and wealthy membership.
SHOW TRANSCRIPT

Harvard just made it a lot less appealing to be a member of a sorority or fraternity.

On Friday, The Harvard Crimson reported the college plans to penalize members of single-gender organizations, based on the argument they're discriminatory.

The school's president said, "They play an unmistakable and growing role in student life, in many cases enacting forms of privilege and exclusion at odds with our deepest values."

According to an email to students from the school's president, members of the class of 2021 will be excluded from campus leadership positions and endorsements for prestigious fellowships if they decide to join an unrecognized single-gender club.

Harvard doesn't officially recognize fraternities, sororities or final clubs. Final clubs, which are at the center of this debate, exist for both men and women. And they have a reputation for having largely white and wealthy membership.

Men's final clubs have come under extra scrutiny recently — even though some clubs have invited women to be members in recent years. A survey launched last year suggested women who were either members of final clubs themselves or attended men's final club events were more likely to experience nonconsensual sexual contact.

But enforcing the new rules could be difficult, precisely because of how private the clubs are.

According to The Harvard Crimson, members of the advisory committee tasked with coming up with a way to enforce the rules have yet to be appointed.