'Hamilton' Gets Another Shot To Make History At The Tony Awards 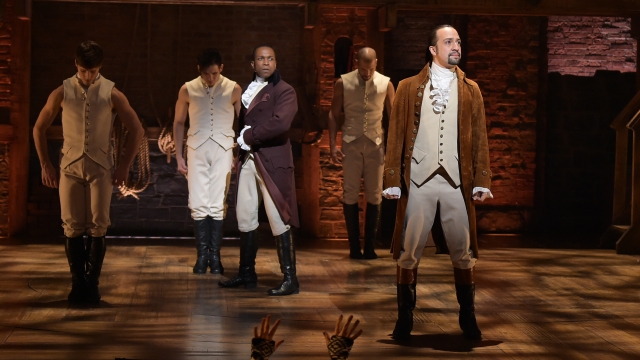 SMS
'Hamilton' Gets Another Shot To Make History At The Tony Awards
By Cody LaGrow
By Cody LaGrow
May 3, 2016
The musical would need to win 12 Tony Awards to tie the current record for most Tony wins.
SHOW TRANSCRIPT

The musical "Hamilton" has a shot at making more history — and this time, it's at the Tonys. The show just earned an unprecedented 16 nominations.

The musical, based on the life of Alexander Hamilton — or the man on your money — broke the 15-nominations record held by "The Producers" and "Billy Elliot." The show's creator, Lin-Manuel Miranda, shared the secret in his secretary of the treasury sauce.

"The joy of discovery of, if I tell Hamilton's story, I actually tell the story of the forming of our country. That was a joyous experience, and I think, honestly, that's the secret sauce, in the score," Miranda explained to PBS.

The show seems to be up for every award, including the highly coveted Best New Musical. It would need 12 wins to tie "The Producers" for the most Tony wins of all time.

"Hamilton" has already won a Grammy, and Miranda won a Pulitzer for the drama. The musical even earned the creator time to drop a few bars with the leader of the free world.

This video includes clips from Broadway.com and The White House, and images from Getty Images.