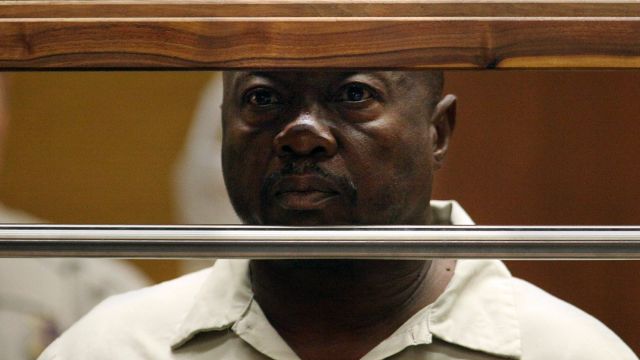 SMS
'Grim Sleeper' Lonnie Franklin Convicted Of 10 Murders
By Matt Picht
By Matt Picht
May 5, 2016
Franklin has been convicted of killing 10 people in two murder sprees separated by a gap of nearly 14 years.
SHOW TRANSCRIPT

A man referred to as the "Grim Sleeper" was convicted Thursday of serial murder spanning over two decades.

Nine women and one teenage girl were shot or strangled to death by the killer in Los Angeles from 1985 to 2007; a nearly 14-year gap between the 1988 and 2002 murders gave the Sleeper his nickname.

Lonnie David Franklin Jr. was linked to the killings by Enietra Washington, who survived a murder attempt in 1988. Washington testified her attacker took a picture of her body; investigators later found a picture of Washington, along with photos of other women, in Franklin's possession.

Prosecutors tied Franklin to the other murders through either DNA or ballistics evidence; they argued Franklin is a sexual predator who targeted vulnerable women during the area's crack cocaine epidemic in the '80s.

Franklin's trial will now move to the sentencing phase, where he could face a possible death sentence. Prosecutors are expected to argue Franklin committed several more murders that he wasn't formally charged for.