'Google Fortunetelling' Is Activism In Disguise 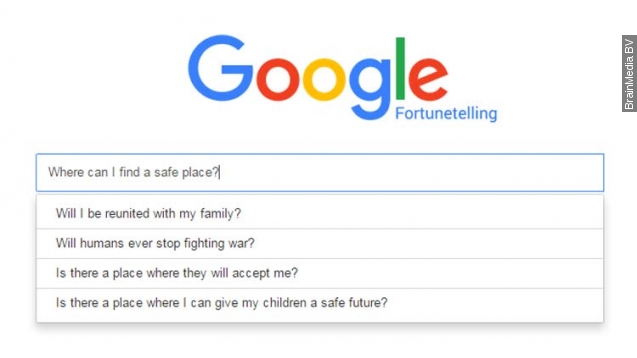 Google Fortunetelling is a website, but it's not a Google product. And it's not interested in telling you your future.

The website is meant to help Syrian refugees, and the URL 'betagoogle' is meant to make you care about the topic. (Video via United Nations High Commissioner of Refugees)

Here's what happens: You eagerly enter a question into the search bar, and the Google dupe lets you know refugees have more pressing questions. For example: "Is there a place where I can give my child a safe future?" and "will I be reunited with my family?"

The site then encourages you to find out how you can help locally and to donate to relief efforts. They make it easy by linking to the United Nations High Commissioner for Refugees.

According to Digiday, a creative communications agency in the Netherlands confirmed it created the site.

One of the creators told Inverse, "When a visitor uses this website, they will be confronted with their own selfishness. Because we used a fake Google site, we got worldwide attention because all people are interested in a new feature from Google."

Lots of people have shared the site on social media. And they either don't know it's not affiliated with Google, or they're playing along with creators of the site.

To its credit, even though the site isn't affiliated, the real Google also encourages UNHCR donations along with donations to other organizations helping out.