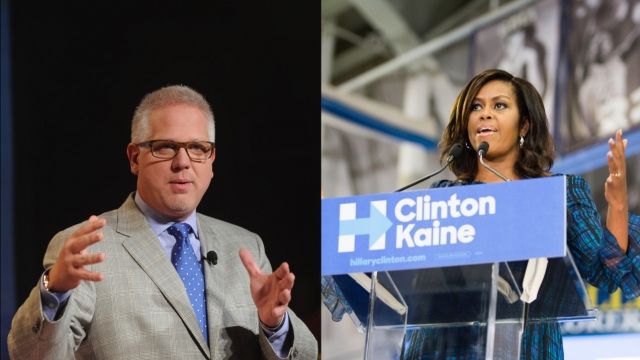 Glenn Beck had some praise for Michelle Obama.

The first lady spoke at an October campaign rally for Hillary Clinton.

She said referring to the tape: "And I can't stop thinking about this. It has shaken me to my core that I couldn't have predicted."

During her speech, Obama berated Donald Trump for the now notorious tape in which he brags about groping women.

"So many have worked for so many years to end this kind of violence and abuse and disrespect, but here we are," Obama said.

And on his show Friday night, Beck expressed concern that Trump has handed Democrats the so-called "war on women" that some conservatives have denied existed.

Beck, who left the Republican fold last year, has been worried about Trump's effect on the party for a while now.

But the release of the 2005 tape seems to have solidified his stance. He wrote last week, "It is not acceptable to ask a moral, dignified man to cast his vote to help elect an immoral man who is absent decency or dignity."

He also told Time he was worried Trump was costing the Republican Party an entire generation of voters.

But despite speculation the conservative pundit would vote for Clinton, Beck says he's not voting for either major candidate.

He said on his website: "I believe that neither candidate has the values, decency or principles to be the leader of the free world."