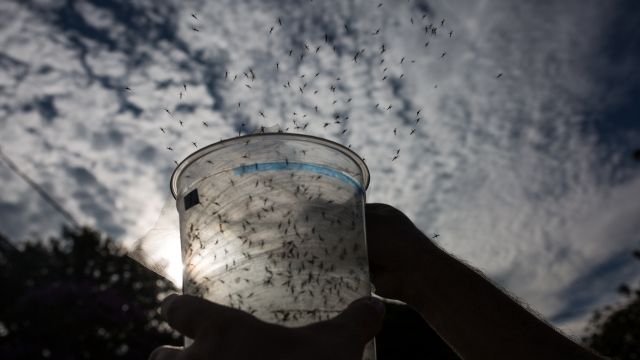 SMS
Genetically Modified Mosquitoes Could Be Let Loose In Florida
By Lindsey Pulse
By Lindsey Pulse
November 21, 2016
Officials want to use the mosquitoes to combat Zika, but some residents question the safety of the modified pests.
SHOW TRANSCRIPT

Genetically modified mosquitoes could soon be released in the Florida Keys to combat Zika.

NPR reports that county residents approved a measure to allow the company Oxitec to let the bugs loose — but some residents aren't sold.

When the modified male pests mate with regular female mosquitoes, their offspring die. That reduces the mosquito population. Oxitec's trials in Brazil and a few other countries reported massive success.

Some residents worry the modified mosquitoes aren't safe. And while Zika is in Florida, there haven't been any locally transmitted cases in the Keys.

Still, officials in the area have given the go-ahead to try the bugs out in some parts of the Keys.

A Key West commissioner said a big part of her job "is to kill mosquitoes and to protect the residents and the county."

Earlier this week, the World Health Organization said Zika is no longer a global health emergency — it's more of a chronic problem than a crisis.

But that doesn't mean there's no need to worry. One WHO executive said the organization is in no way "downgrading the importance of Zika."