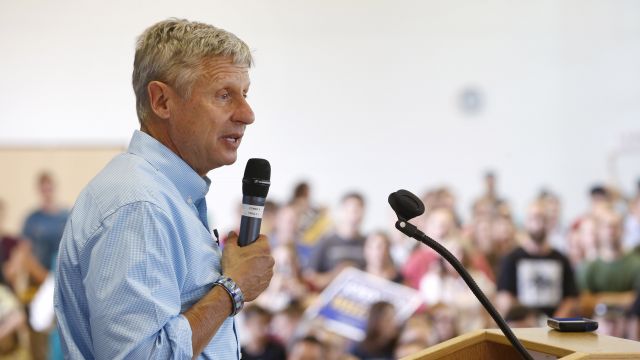 By Matt Picht
September 20, 2016
Johnson says the FBI can take over the homeland security bit of the Department of Homeland Security.
SHOW TRANSCRIPT

Gary Johnson has a lot of questions about the Department of Homeland Security.

Apparently, Johnson thinks we'd just be better off without the whole complicated thing.

The Libertarian presidential candidate told Fox Business, if he's elected, he'd shut down the Department of Homeland Security, saying it was just another layer of bureaucracy.

Johnson's comments came after police apprehended a suspect in a series of nonfatal bombings in New York and New Jersey.

The DHS was formally established in 2002, combining the responsibilities of 22 separate agencies into one department. Its current mandate is pretty broad, spanning the Transportation Security Administration, U.S. Customs and Border Patrol, the Office of Cybersecurity and Communications and the Secret Service.

Johnson says he'd divvy up the department's current responsibilities back into the original agencies they were part of before being consolidated into the DHS.

As for the most important part of the department's job, homeland security, Johnson wants to hand that back over to the FBI.